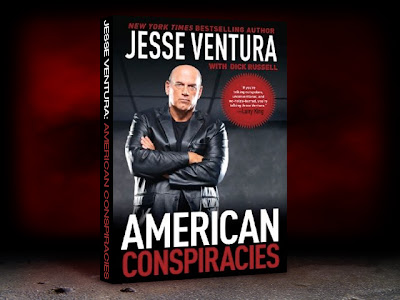 Jesse Ventura tells it like it is, and this time he tackles our government’s biggest secrets. In this explosive account of wrongful acts and on-going cover-ups, Jesse Ventura takes a systematic look at the wide gap between what the American government knows and what it reveals to the American people. For too long, we the people have sat by and let politicians and bureaucrats from both parties obfuscate and lie. And according to this former Navy SEAL, former pro wrestler, and former Minnesota governor, the media is complicit in these acts of deception. For too long, the mainstream press has refused to consider alternate possibilities and to ask the tough questions. Here, Ventura looks closely at the theories that have been presented over the years and separates the fact from the fiction.

In Ventura’s eyes, the murder of Abraham Lincoln and the assassinations of the Kennedys and Martin Luther King, all need to be re-examined. Was Watergate presented honestly, or was the CIA involved? Did the Republican Party set out to purposefully steal two elections on behalf of George W. Bush? Has all the evidence been presented about the 9/11 attacks or is there another angle that the media is afraid to explore? And finally, is the collapse of today’s financial order and the bailout plan by the Federal Reserve the widest-reaching conspiracy ever perpetrated?

“I wouldn’t mind seeing Ventura run for president (or for senator, or dog-catcher, or whatever). In addition to talking conspiracy, he’s likely to raise all sorts of other trouble.”—Damon W. Root, Reason Magazine . About the Author Dick Russell is a nationally respected activist, environmentalist, and author of five critically acclaimed books, including The Man Who Knew Too Much and Don't Start the Revolution Without Me (with Jesse Ventura). Russell is a prolific publisher in many of the nation's top magazines and has been a guest on many national TV and radio programs, including the Joan Rivers Show and NBC Nightly News. Married and with one child, Dick Russell divides his time between Boston and Los Angeles.

Jesse Ventura is the former governor of Minnesota and author of several bestselling books, including Don’t Start the Revolution Without Me! He lives in Dellwood, Minnesota and Baja, Mexico.

American Conspiracies: Lies, Lies, and More Dirty Lies that the Government Tells Us

Save your money with Discount coupons, Coupon Codes and Promotional Codes at Deals365.us