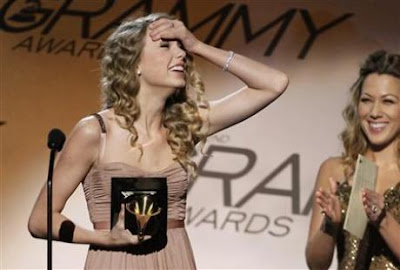 LOS ANGELES (Reuters) - Country-pop starlet Taylor Swift, who rocketed to stardom with ballads of teen love that she wrote on her bedroom floor, Sunday became the youngest artist to win the coveted Grammy for album of the year.

Swift, who turned 20 in December, took home four awards after being nominated eight times. She had never previously won any Grammys. Her second album, "Fearless," was the most popular release in the United States last year. U.S. sales to date stand at 5.4 million copies.

The fresh-faced singer, known for her blonde curly mane, had been expected to dominate the music industry's top awards. But she was overshadowed by R&B singer Beyonce, who won six awards including song of the year -- the most won by a female artist at a single event.

Both were eclipsed for record of the year by Tennessee rock band Kings of Leon, who were the surprise honorees for their pop-radio hit "Use Somebody."

In winning album of the year, Swift broke a record held since 1996 by Alanis Morissette, who was 21 when she won for "Jagged Little Pill," an album with decidedly more adult content.

Swift also was the first solo female country winner ever of the award, and the first female pop winner since Celine Dion won in 1997 for "Falling Into You."

"I just hope that you know how much this means to me ... that we get to take this back to Nashville," said Swift.

She also won the Grammy for best country album, and a pair of awards for her song "White Horse," female country vocal performance and best country song.

Backstage, Swift told reporters that despite her crossover success in the pop field, she still considered country music her first love.

"Country music is absolutely going to be my home because of the stories that are told within country music," she said.

She was planning to catch a flight straight after the event to Australia where she is set to play a sold-out arena tour. Her album has been certified gold or platinum in 16 international markets, her spokeswoman said.

Beyonce won song of the year -- a songwriters' award for "Single Ladies (Put a Ring On It)." The anthemic hit also yielded Grammys for R&B song and female vocal performance, and Beyonce was additionally honored for contemporary R&B album with "I Am ... Sasha Fierce," traditional R&B vocal performance for her cover of "At Last" and female pop vocal performance with "Halo."

"This has been such an amazing night for me," she said after picking up the latter award.

Beyonce would have won seven awards if her husband Jay-Z had not beaten her in the rap/sung category. He ended up with three Grammys overall, taking his career haul to 10. Beyonce's career tally rose to 16, including three with her former group Destiny's Child.

Kings of Leon, long more popular internationally, finally achieved mainstream success in the United States last year with "Use Somebody." Brothers Caleb, Nathan and Jared Followill and their cousin Matthew Followill also won a pair of Grammys in the rock field for the song, taking their career haul to four.

Country combo the Zac Brown Band was named best new artist as expected. The Atlanta-based group becomes the first band to win the award since 2005.

The popular concert draw released its debut album in 2004, but did not achieve national prominence until 2008 when it released its major-label debut "The Foundation," which peaked at No. 17 on the U.S. pop chart.

The televised ceremony was packed with diverse performances, since 100 of the 109 categories were announced during a low-profile ceremony earlier in the day.

Mary J. Blige and Italian tenor Andrea Bocelli earned a standing ovation for their version of "Bridge Over Troubled Water," performed as a fundraising tribute to earthquake-ravaged Haiti. The song was scheduled to go on sale at iTunes immediately afterwards.

"I think she proved her point tonight that she's not just a costume freak," veteran shock-rocker Alice Cooper, one of Lady Gaga's sartorial inspirations, told reporters.

(Editing by Cynthia Osterman.)
Posted by Robalini at Wednesday, February 10, 2010