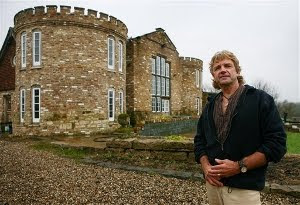 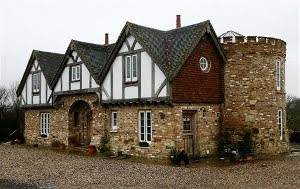 A man's home is his castle — but not if British authorities say it has to be destroyed.

That's the situation faced by Robert Fidler, a farmer who lost a High Court bid Wednesday to protect the once-secret castle he built 40 miles (65 kilometers) south of London and kept hidden from planning authorities.

The adverse decision means Fidler's roof must come down. He has one year to comply unless an appeal is successful.

To keep prying eyes from noticing his unauthorized abode, Fidler placed bales of hay and tarpaulin around his dream home in Salfords, Surrey, authorities said. The court ruled he could not benefit from his deception.

Mike Miller, a chief planner with the Reigate and Banstead Borough Council, said the council was delighted with the decision, which it viewed as a vindication of the decision to challenge Fidler in court.

"This was a blatant attempt at deception to circumvent the planning process," he said, adding that Fidler now has one year to destroy the castle, remove the ruins and return the property to its original state.

The unusual castle, complete with cannon, ramparts and stained glass, was completed in 2002 and Fidler lived there with family for more than four years before the authorities started legal action against him.

Fidler, who has had disagreements with planning authorities before, anticipated that his request for permission to build the castle would be denied, so he tried to take advantage of a rule that allows a structure to be legalized if it has been lived in for four years.

Fidler's lawyer, Pritpal Singh Swarn, said the decision will go to the Court of Appeal because it raised important planning issues. A further appeal to European courts is possible if British courts again reject Fidler's bid to legitimize his castle.

He said Fidler was extremely disappointed with the ruling and no local residents had complained about the castle.

"It has been pursued at the expense of the taxpayer which we find deeply regrettable — but Mr. Fidler will continue to fight for the right to live in his home," the lawyer said.

Authorities said he incorporated two grain silos into the design, covering them with material to give them a castellated appearance.

"Mr. Fidler made it quite clear that the construction of his house was undertaken in a clandestine fashion," the court ruled.
Posted by Robalini at Thursday, February 11, 2010