Biggest of the big waves 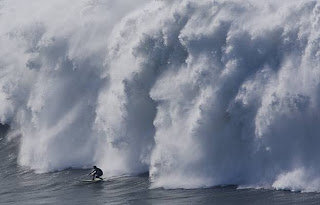 The sport of surfing reached new heights at Mavericks on Saturday. In the end, it wasn't so much a contest as an elevated state of mind, a heady swirl of fear, respect and bravado among some of the best big-wave riders in the world. In the end, most everyone agreed, some history was made.

From the locals to the Hawaiians to seasoned men on the judges' stand, the talk of the after-party centered around a powerful statement: These were the biggest waves ever for a paddle-surfing contest. South Africa's Chris Bertish took home the $50,000 first-prize check, but as Bertish said, "It took all of us to make this happen. I cannot believe what we saw out there today, and how well it was surfed by everybody."

It was one of those magical days in which everything came together. There were fears of a morning south wind, but the day dawned calm with finely groomed seas. The swell was even bigger than expected, reaching a formidable 22 feet at 17 seconds (the period between waves) on the Half Moon Bay buoy, translating into wave faces of 50 feet and beyond. The weather was sunny and warm, and only late in the day, with the arrival of a northwest wind, did the ocean take on a slightly unfavorable texture.

Not a soul complained. What happened Saturday was the convergence of spectacular conditions, some money at stake, giant surf and 24 men who really wanted it. The wipeouts were brutal and frequent; at least a half-dozen surfers were either injured, dazed or rendered temporarily lifeless by interminable hold-downs. Rescue missions, via personal watercraft, were commonplace. Somehow, on one of the most challenging surf days ever seen anywhere, everyone escaped serious consequence.

"But I don't know if I want to surf for a while," fifth-place finisher Carlos Burle said with a smile. "I took three heavy wipeouts today. I hurt everywhere. My body's all twisted."

Over the 40-odd years in which big-wave surf contests have been held, the benchmarks were always set at Hawaii's Waimea Bay: the 1974 Smirnoff contest, the 1990 Eddie Aikau Invitational, and this winter's Aikau, held in December. In all cases, the surf was 25 to 30 feet on the so-called Hawaiian scale, similar to what arrived at Mavericks on Saturday.

In all of those cases, though, virtually every massive, scary-looking wave was ridden. For every wave tackled successfully on Saturday, another half-dozen saw surfers getting caught inside, sucked over the falls, taking a horrible mid-face wipeout, finding themselves out of position, or backing off because they wanted no part of the drop. In that sense, Mavericks truly set itself apart. Its vast and ominous playing field was truly awesome to behold.

Gary Linden, the contest's head judge and long known as one of the most respected men in the sport, thinks he may have seen some 60-foot faces on occasion. "I'll have to look at the images," he said, "but what happened today took surfing to another level. I used to think I'd surfed some pretty big waves in my life. But if this is big-wave surfing, what I did is something else."

Fourth-place finisher Dave Wassel, proud of his Hawaiian upbringing and the North Shore spots he's ridden for years, said Saturday's event "erased 50 years of surfing history in one day. We have some decent waves in Hawaii, but you guys have such a good wave here."

It was a humbling day for some very big names. Grant (Twiggy) Baker distinguished himself, as always, but after getting a perfect-10 ride in the first semifinal, he couldn't get another wave and wasn't able to advance. Defending champion Greg Long got just one wave in his heat, got buried by an avalanche of whitewater and hit the bottom - extremely rare on Mavericks wipeouts - before getting back to the surface.

For the 35-year-old Bertish, who comes from a surfing family in Cape Town, South Africa, the experience was almost overwhelming. Upon learning Thursday that the contest would happen, he boarded the first flight to Amsterdam, then on to Detroit and finally San Francisco. He arrived Saturday morning, a bit after midnight, and learned that both of his surfboards had been lost en route.

That's when Jeff Clark's name came back into the picture. Deposed as contest director, and having recently filed a lawsuit against Mavericks Surf Ventures, Clark had become a forgotten man in the days leading up to the event. But he has known Bertish for years, and put his travel-weary friend up for the night.

Unable to resist the spectacle of his cherished break, Clark watched the contest from the channel - and Bertish's choice of a replacement board seemed entirely fitting: a Jeff Clark special. The legend lives on.

Jay Moriarity Award (to the surfer who best exemplifies the spirit of the late Mavericks surfer): Dave Wassel.

Email ThisBlogThis!Share to TwitterShare to FacebookShare to Pinterest
Labels: Surfing