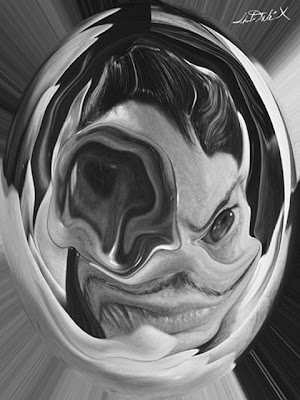 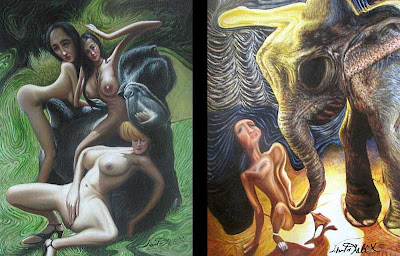 About the Salvador DaliX paintings: 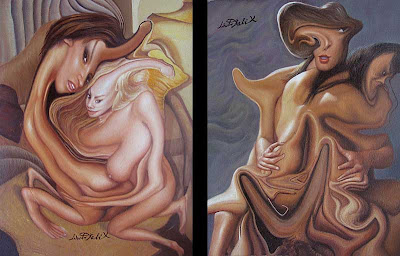 I was always interested in the person of Salvador Dali. As a ‘provocateur’ and surrealist per excellence he made several legendary interventions and performances which rarely were documented by fotos or film. They mainly exist as stories and legends. Through these stories I discovered many details about the sexual life of Salvador Dali: his initial trauma regarding sex due to his severe father who teached him the dangers of sex when he was only a child, showing him a book with pictures of male genitalia suffering from sexually transmitted diseases. This supposedly lead Dali to become ‘The great masturbator’ in order to avoid intercourse. Then the trauma with his student friend - the writer Garcia Lorca - who presumably tried to rape him but did not succeed according to Dali. His relatively late discovery of various sexual pleasures with his wife and muse Gala and finally his passion for Amanda Lear, a transvestite and a popstar, with whom he had a long time relationship and helped financially to make a sex change operation. All these stories inspired me to start producing the ‘Salvador DaliX’ paintings, as an ‘hommage’ to Dali and as a challenge: to make paintings ‘à la Dali’ under the identity of an obscure impostor called Salvador DaliX. This ‘X-rating’ of Dali with a pseudonym reflects the already very erotic character of Dalis original oeuvre and hints at the numerous Dali forgeries existing on the market - many of them co-produced by Dali himself. I am interested in the idea of creating ‘problematic paintings’. This started with the ‘Painting China Now’ series that I made together with Ondrej Brody in 2007 and continues with a different purpose in the Salvador DaliX series. The Salvador DaliX paintings are based on pornographic photographs stolen from the internet, then manipulated with the computer and finally painted by ‘my assistants’ in China: commercial painting companies who specialize in reproducing any picture you e-mail them. All the paintings are ‘original’ oil on canvas - handmade of course. It seems that the ‘Made in China’ stamp devaluates the commercial value of the paintings even more than the fact that they were painted by (a poor artists) assistants. At the same time many people admire paintings of famous contemporary artists that are produced by chinese, russian or eastern european assistants who paint for 10 US dollars an hour in New York, Berlin and London. The Salvador DaliX paintings refer to many contradictions and problematic aspects (conceptual, economical, political and visual) that I find interesting. (K. Paetau, 2010) 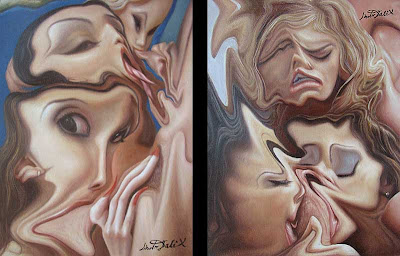 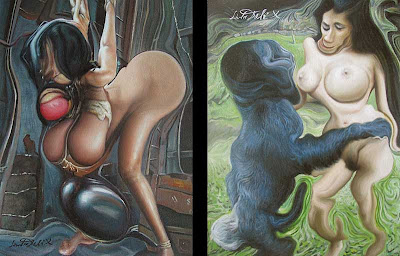 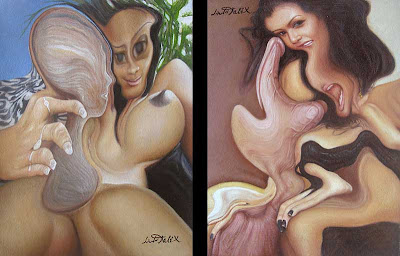 there is always something interesting on this blog

thanks an eye to this tips
pmu
turf

awesome! It's true haven't seen you put much painting up here in a while, but really sweet!
painters edmonton