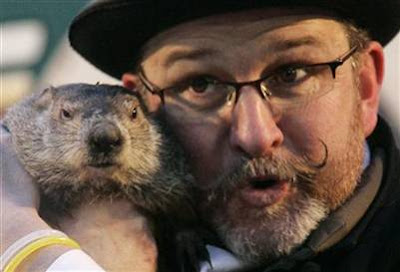 PUNXSUTAWNEY, Pa. - The world's most famous groundhog, Punxsutawney Phil, emerged before chilly revelers in western Pennsylvania on Tuesday to see his shadow, a sign his handlers say means winter will last another six weeks.

Some 12,000 people gathered before dawn to await his weather forecast. They came from as far as Chile and the Netherlands, braving a chilly 18 degrees Fahrenheit to see the more than century-old ritual.

Bill Deeley, president of the Inner Circle of the Punxsutawney Groundhog Club — and reputedly the only person in the world who can speak "groundhogese" — declared that Phil had "seen his shadow" as he has about 90 percent of the time.

For groundhog lovers who were unwilling to spend a night in the cold, organizers for the first time sent the text of the prognostication to people's cell phones.

German tradition holds that if a hibernating animal casts a shadow on Feb. 2 — the Christian holiday of Candlemas — winter will last another six weeks. If no shadow is seen, legend says spring will come early.

The Inner Circle of the Punxsutawney Groundhog Club annually announces Phil's forecast at dawn on Gobbler's Knob, about 65 miles northeast of Pittsburgh.

The Groundhog Club says that since 1887 Phil and his predecessors have predicted more winter weather by seeing their shadow nearly 100 times, but there are no records for nine years.

Several other Groundhog Day celebrations are held around the United States. A high-profile rival delivered a different prediction on Tuesday, with New York City media reporting that "Staten Island Chuck" did not see his shadow.

Animal rights group People for the Ethical Treatment of Animals had criticized the event for traumatizing the groundhog and said Phil should be replaced with a robotic rodent.

Organizers dismissed the idea as "ridiculous."

John Martin, 63, a retired engineer, said he drove 350 miles from his home in Sardinia, Ohio, to witness the event for the fifth time in 10 years.

Martin said it was hard to explain to his friends and neighbors why he should drive so far to attend the ceremony in the dark and cold.

Some others were drawn by the 1993 movie "Groundhog Day" starring Bill Murray.

Priscilla McMannes, a 40-year-old warehouse worker, drove five hours from her home in Stanton, Va., to attend for the first time.

"We saw it on TV and we watched the movie, and we wanted to see what all the fuss was about," she said.
Posted by Robalini at Wednesday, February 10, 2010