Lots of Air, No Drama as Shaun White Takes Gold 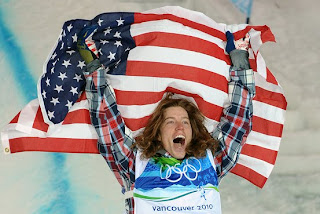 Shaun White literally soared above his competition in the men's halfpipe event at Cypress Mountain, British Columbia Wednesday, delivering the U.S. its fifth gold medal in 2010, and sealing the snowboarder's legacy as one of the most dominant Olympians in history.

Mr. White, who became the first person to win back-to-back gold medals in the halfpipe, performed his much-hyped, signature move called the "Double McTwist 1260," which involves two off-axis backflips while doing 3.5 full rotations, all in one jump. The trick is so advanced (no other competitor in the event even attempted it) that merely landing it was enough to ensure Mr. White victory. Turns out, however, he never even needed to do it, only performing it on his last run, because it would have been a waste not to.

But it was not Mr. White's McTwist that awed the crowd Wednesday night. It was the sheer distance he traveled into the air. He jumped so high on his first jump during the finals that the crowd let out a sudden gasp. Everyone went silent for a moment before Mr. White exploded into an blur of acrobatics. His first run, even without his most awe-inspiring stunt, was so devastating that the race from then on was for second place. Asked why he performed the death-defying trick for seemingly no reason, Mr. White responded, "I just felt like I didn't come all the way to Vancouver not to pull out the big guns. I put down the tricks I've worked so hard on."

While rainy, mushy snow created some sub-par practices leading up to the competition, Wednesday's halfpipe final went down in ideal conditions. It was the clearest, sunniest day of the Olympics so far, and in the afternoon, Cypress Mountain offered spectators unobstructed views of the surrounding mountains and the bay.

The competition was not as crisp as the weather, with many riders missing landings during qualifying rounds and the semifinals. Some favorites didn't even make it to the semifinals. The Americans once again dominated the event, with Mr. White's gold and teammate Scott Lago snatching the bronze. Finnish rider Piiroinen Peetu took silver, but was still more than three points off Mr. White's score of 48.4. American Louie Vito (of Dancing with the Stars fame) took fifth place, with a conservative run that failed to wow judges.

American supremacy over this event looked like it might be waning in the semifinals. Although Mr. White dominated on his first qualifying run with a score of 45.8, in what looked like an effortless display of his dominance, three of the top five spots in the final were taken by Japan and Finland. Japanese boarders Ryo Aono and Kazuhiro Kokubo faltered, however, allowing Mr. Lago to sneak into bronze with a surprisingly solid first run.

There was no question the level of competition had jumped by leaps and bounds since Torino four years ago. As more countries, like Japan, have focused their efforts on snowboarding, increased competition has pushed the sport's growth curve ever steeper, toward more dangerous tricks.

Though Mr. White's Double McTwist 1260 sounds similar to something that might come in a Happy Meal, it is anything but happy. Mr. White has admitted to being "scared" practicing for it and last month, at the X Games, he hit his head so hard attempting it that his helmet flew off and into the air. He returned to win the gold medal in that competition, but it was a reminder of exactly how much bigger and higher snowboarders are going these days. Olympic hopeful Kevin Pearce is still recovering from severe brain injury after a December crash that left him impaired.

"With these type of corks you need to realize you're putting your life on the line," said Ben Mates of Australia, who did not make the final run. Mr. Mates decided to play it safe, rather than try one of the sideways back flips that the top riders were completing. "It definitely crossed mind whether to do that trick, and I just decided to land on my feet," he said after his final run.

All the high-flying daredevil tricks are somewhat lost on the broader sports watching public. Most people in the stands Wednesday had trouble describing the tricks they had come to see. Noel Castellanos, a jewelry designer from Saratoga, Calif., tried to describe Mr. White's signature McTwist this way: "A couple of twists, spin around, some somersaults. I'm not actually sure. All I know is it looks pretty impressive."

John Murray, a translations engineer from Atlanta, Georgia, said he loves to watch Mr. White and has seen him compete five times, but still doesn't actually know what he's watching. "My guess is that a Double McTwist is when he gets to his apex, he's going to do like a 720 around and then also twisting and tumbling at the same time. Well, I can guess at it. There's a lot going on."

Mr. White's competitors say they are falling farther behind the world's best halfpipe rider because they lack the facilities to train at his level. "We try to do the same tricks, but every year he advances more compared to us," said Gary Zebrowski of France. "Especially to the French guys because we don't have special halfpipes to try the tricks. That's why we are less better."

"We don't have pipes like this," said Markus Malin of Finland. "We have only the small pipes and they are not in really good shape." Mr. Malin hopes that by earning a silver and getting three riders into the final round Wednesday, Finland might embrace snowboarding. "Maybe it's like they woke up and will build some kind of pipe there," he said.

When asked how Mr. White gets so much higher than everyone else, Justin Lamoureux of Canada responded "A half a million dollar pipe all to yourself. That would be a good start," referring to Mr. White's personal halfpipe built with the help of sponsor Red Bull.

Jake Burton, credited with creating modern snowboarding and whose company designed the red, white and blue plaid outfits worn by the American team, said Mr. White has paid his dues. "He started at the bottom" said Mr. Burton. "He's taken his spoils and is using them to make him better." Mr. Burton says Mr. White's ability to get so much higher than his competitors comes from his skateboarding practice, which helps develop the skill of propelling the board into the air.

After ending up in ninth place Wednesday, Japan's Mr. Aono said he has finally figured out what it will take to beat Mr. White. "Big Air," he said. With a smirk and a thumbs up sign, he said "I need speed."

Write to Reed Albergotti at reed.albergotti@wsj.com
Posted by Robalini at Sunday, February 28, 2010

Well... that's very interessting but frankly i have a hard time understanding it... I'm wondering what others have to say....