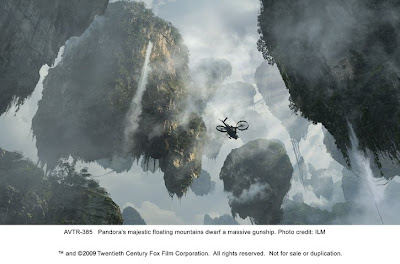 Avatar has sailed past Titanic to become the highest-grossing movie of all time. In just 47 days, Avatar has grossed $601.1 million, while Titanic made $600.8 million in its entire run and took 252 days to cross the $600 million mark.

With this milestone, Avatar has completed the triple crown of box office gross records: first, it topped the foreign-only chart on Jan. 23, then it reigned over the worldwide chart (foreign plus domestic) on Jan. 25, and now, as of Feb. 2, it resides atop the domestic chart. Its foreign haul has risen to $1.474 billion. Add in domestic, and its worldwide gross stands at an incredible $2.075 billion.

According to the National Association of Theater Owners, the latest available statistic for national average ticket price is $7.61 for the fourth quarter of 2009. IMAX claims an average ticket price of $14.58, but, at the time of this writing, there is no official word for regular 3D presentations. A survey of theaters across the country suggests a $2 to $4 premium for 3D over 2D and a $10 average ticket price (we'll update with better data as we dig it up). With these stats one can estimate 38.7 million tickets have been sold in regular 3D, 15.2 million sold in 2D and 6.8 million tickets sold in IMAX 3D.

All told, Avatar's estimated admission count is 60.7 million thus far, or less than Titanic through the same point (47 days in). It's also less than half of Titanic's 128 million total estimated admissions. Emphasizing the impressiveness of Avatar, it took such recent blockbusters as The Lord of the Rings: The Return of the King, Spider-Man 2, The Passion of the Christ and Star Wars: Episode III - Revenge of the Sith their entire runs to reach around 60 million admissions.

Unfortunately, the industry does not track admissions, only dollars. Absent proper admissions tracking, estimated admissions are determined by dividing the grosses by the average ticket prices, but this method is certainly iffy and should not be seen as definitive. It's best used for recent releases that have complete box office records, but, even then, one may know the national average ticket price but not the average for an individual movie. The audiences vary demographically and regionally for each movie, which means different average ticket prices. What's more, for a picture like Avatar, the method does not address leveling the playing field for the possible deterrent of higher ticket prices, how the 3D presentations impact 2D attendance or how 3D currently has far fewer theaters than past 2D blockbusters.

However, it's better to have an approximation than to have nothing. Only the money may matter to Hollywood, but attendance is important from an audience and cultural perspective. The disparity between Avatar and Titanic is so huge according to this method, that it is safe to say that Titanic sold a boatload more tickets.

Pointing out the estimated admissions in no way diminishes the box office achievement of Avatar. The purpose is to add perspective. There is no doubt that Avatar is a phenomenon in its own right with its own unique set of circumstances and that it stands as one of the greatest box office runs of all time.
Posted by Robalini at Thursday, February 11, 2010

vimax pills - good blog friends! Post your article which is also useful for readers and to share information or experiences you have. I will visit your blog again. penis enlargement pills - http://www.male-sexual.com

They are becoming the enhancement option of choice for many men for several reasons. vimax pills is the best penis enlargement pills on the market today.more info visit http://www.male-sexual.com/vimax-pills.html
- http://www.pillspenisproducts.com