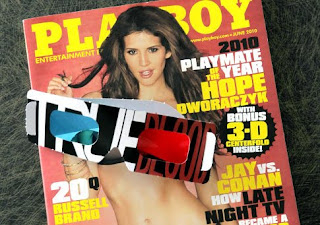 Struggling Playboy magazine has an eye-popping new trick to attract readers - put its centerfold in 3-D.

The magazine's June edition, which hits newsstands on Friday, features centerfold Hope Dworaczyk in a 3-D pictorial. It will include a pair of classic blue-and-red glasses so you can an eyeful of Dworaczyk's... uh, extra dimensions.

"What would people most like to see in 3-D?" asked Playboy founder Hugh Hefner. "Probably a naked lady."

This is the latest attempt by Playboy to attract new readers, as the magazine has seen circulation drop from 3.5 million in 2006 to 1.5 million today.

And as Playboy competes not only with other men's magazines, but also with the proliferation of racy images of women on the Internet, Jellinek is right on.

"This particular picture is one example of how books and magazines are different (than computer images)," Hefner added. "You can hold it in your hands, save them, and as Dad used to, put them under the mattress."

Hefner, who said he thought about 3-D images for the magazine long ago, but didn't move forward because of the heavy expense, happily found a partner to help absorb the cost this time around.

To promote its show, "True Blood," HBO partnered with Playboy on the 3-D centerfold project, branding the glasses with the show's name.

Now for the question that many a reader is dying to know: do the glasses really work? According to Dworaczyk, they sure do.

"It's kind of like it says on the rearview mirror," Dworaczyk joked. "Things may appear larger."
Posted by Robalini at Sunday, May 16, 2010