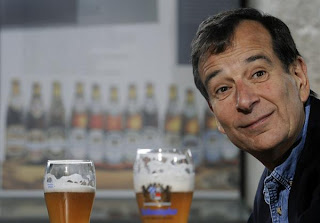 Beer Baron
How the founder of Sam Adams bottled lightning.
Josh Hyatt | NEWSWEEK
May 14, 2010
From the magazine issue dated May 31, 2010

Jim Koch loves to talk about little companies that take on the Big Guys: artisanal-cheese makers who battle importers, the microdistillers who taunt liquor giants—and, most of all, the tiny microbrewer who elbows aside industry behemoths with a full-flavored beer and a well-crafted marketing pitch.

That last one is Koch himself, of course. When he launched Samuel Adams Boston Lager in 1984, there were fewer than 10 microbreweries in the U.S. Store shelves were dominated by bland beers made by Miller Brewing Co. and Anheuser-Busch. By last year the number of microbreweries (companies that make fewer than 2 million barrels a year) reached 1,500, according to the Brewers Association, accounting for about 4.3 percent of total sales. And while Sam Adams may not have been the first craft brew out there ("Apple wasn't the first company to produce a PC, either," says Koch), it is the most successful. Sales reached $415 million in 2009, making it the country's largest craft brewery. "Jim Koch was the one who led the revolution for all of the other entrepreneurs who wanted to create beers," says Gerry Hills, professor of entrepreneurship at Bradley University.

Koch (pronounced "cook") was working at the Boston Consulting Group when he began brewing suds in his kitchen. He had received three degrees from Harvard (B.A., M.B.A., J.D.), but brewing was in his blood. His father and grandfather were in the business; Koch used a recipe from his great-great-grandfather. Before long, he scraped together $240,000 and launched the company. Although he named his beer after a Boston patriot, he made it at a big brewery in Pittsburgh, which allowed him to control quality better than most small brewers. "The idea of a high-quality American beer had become a complete oxymoron," says Koch. "Coming from a brewing family, I knew that wasn't true."

He originally sold beer in unlabeled bottles from his briefcase, kept cold with a chill pack. He coaxed bartenders to try them with a 10-second pitch: "Try this new beer. It's handcrafted in small batches. You'll like the taste."

Almost from the start, he annoyed rivals large and small. He took on the big brewers directly, spending big on TV, radio, and billboards. Koch added easily readable freshness dates to his labels, and pointed out that consumers couldn't easily tell if his competitors' beers were old and stale. "Instead of sexy twins or talking animated animals, he talked about the quality of the liquid," notes Sam Calagione, who founded Dogfish Head Craft Brewery in 1995.

But Koch's tactics didn't always go down smoothly with his fellow small-batch brewers, either. He had positioned Sam Adams as a quaint Boston company, but the fact that he didn't even own a brewery irked some microbrewers. Six weeks after Koch launched Sam Adams, the brand was crowned best beer by attendees at the Great American Beer Festival in Denver. Rumors quickly spread that Koch had worked the crowd unfairly, offering tickets to the event in return for votes, according to Garrett Oliver, brewmaster at the Brooklyn Brewery. But Oliver says early jealousy has since fermented into admiration. "From day one, he was pugnacious and he ruffled feathers," recalls Oliver. "But very quietly, we've all learned a lot from him."

Koch, now 61, says he tries to follow the advice his father gave him when he was starting Sam Adams. "He told me, 'People don't drink the marketing, they drink the beer,' " Koch recalls. He still travels to Bavaria once a year to handpick the high-quality hops his company uses. "I knew I could put the best glass of beer in front of the American beer drinker," he says. "I didn't know how big the market would get, or what the challenges were, but I knew I could do that." And that's no small achievement.
Posted by Robalini at Sunday, May 30, 2010

Email ThisBlogThis!Share to TwitterShare to FacebookShare to Pinterest
Labels: Beer