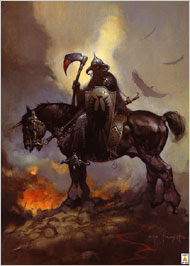 Frank Frazetta, an illustrator whose vivid colors and striking brushstrokes conjured up fantastic worlds of musclebound heroes fighting with broad swords and battle axes to defend helpless women from horrible beasts, died on Monday in Fort Myers, Fla. He was 82.

The death, caused by a stroke, was confirmed by Rob Pistella and Steve Ferzoco, his business managers. In a telephone interview, Mr. Pistella said that Mr. Frazetta, who had a history of strokes, had returned from a Mother’s Day dinner with his family on Sunday night and fell ill. Emergency medical services were called and Mr. Frazetta was rushed to the hospital, where he died.

In the 1940s and 50s, Mr. Frazetta drew for comic strips like Al Capp’s “Lil’ Abner” and comic books like “Famous Funnies,” for which he contributed a series of covers depicting the futuristic adventurer Buck Rogers. He also had his own newspaper strip that ran from 1952 to 1953, called “Johnny Comet” (later retitled “Ace McCoy”).

He drew the movie poster for “What’s New Pussycat?” in 1964, and hit his stride executing detailed illustrations of pulp heroes like Conan the Barbarian and John Carter of Mars for their comic magazines and books. His realistic renderings of otherworldly scenarios (and barely clad women) made him the ideal candidate to illustrate the album covers for popular heavy metal albums like Molly Hatchet’s “Flirtin’ With Disaster” and Nazareth’s “Expect No Mercy.”

In November, Wired.com reported, Mr. Frazetta’s cover artwork for the paperback reissue of “Conan the Conqueror” by Robert E. Howard sold to an unnamed collector for $1 million.
Posted by Robalini at Sunday, May 16, 2010