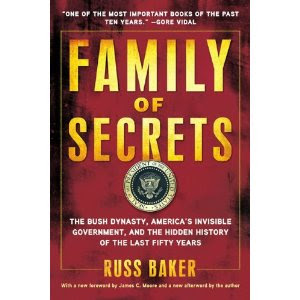 How did the deeply flawed George W. Bush ascend to the highest office in the nation, what forces abetted his rise, and—perhaps most important—have those forces really been vanquished by Obama’s election? Award-winning investigative journalist Russ Baker gives us the answers in Family of Secrets, a compelling and startling new take on the Bush dynasty and the shadowy elite that has quietly steered the American republic for the past half century and more. Baker shows how this network of figures in intelligence, the military, oil, and finance enabled—and in turn benefited handsomely from—the Bushes’ perch at the highest levels of government. As Baker reveals, this deeply entrenched elite remains in power regardless of who sits in the Oval Office.

Family of Secrets offers countless disclosures that challenge the conventional accounts of such central events as the JFK assassination and Watergate. It includes an inside account of George W.’s cynical religious conversion and the untold real background to the disastrous response to Hurricane Katrina. Baker’s narrative is gripping, sobering, and deeply sourced. It will change the way we understand not just the Bush years, but a half century of postwar history—and the present.

Russ Baker is an awardwinning investigative journalist. He has written for the New Yorker, Vanity Fair, the New York Times, the Nation, the Los Angeles Times, the Washington Post, the Village Voice, and Esquire, and has served as a contributing editor to the Columbia Journalism Review. He is the founder of WhoWhatWhy/the Real News Project, a nonpartisan, nonprofit news organization, operating at www.whowhatwhy.com.

Praise for Family of Secrets:

“One of the most important books of the past ten years.”
— Gore Vidal

“A tour de force … Family of Secrets has made me rethink even those events I witnessed with my own eyes.”
— Dan Rather

“Shocking in its disclosures, elegantly crafted, and faultlessly measured in its judgments, Family of Secrets is nothing less than a first historic portrait in full of the Bush dynasty and the era it shaped. From revelation to revelation, insight to insight—from the Kennedy assassination to Watergate to the oil and financial intrigues that lie behind today's headlines—this is a sweeping drama of money and power, unseen forces, and the emblematic triumph of a lineage that sowed national tragedy. Russ Baker’s Family of Secrets is sure to take its place as one of the most startling and influential works of American history and journalism.”
— Roger Morris, former senior staff member, National Security Council, and author of Richard Milhous Nixon: The Rise of an American Politician and Partners in Power: The Clintons and Their America

“Left-wing paranoia? Baker, a solid investigative journalist, works hard to back up his claims – a reader could choke on the complex, interwoven details in Family of Secrets. He's a man on a mission, desperate to stop the “methods of stealth and manipulation that ... reflect a deeper ill: the American public's increasingly tenuous hold upon the levers of its own democracy.”
— San Diego Union-Tribune

“In an era dominated by corporate journalism and an ideological right-wing media, Russ Baker’s work stands out for its fierce independence, fact-based reporting, and concern for what matters most to our democracy…A lot of us look to Russ to tell us what we didn’t know.”
— Bill Moyers, author and host, Bill Moyers’ Journal (PBS)

“Russ Baker has the three most important attributes of any great investigative reporter: He is skeptical, he is fearless, and he is indefatigable. Whenever he examines anything—including the most allegedly wellcovered topics—he breaks important new ground.”
— David Margolick, author and contributing editor, Vanity Fair
Posted by Robalini at Saturday, May 22, 2010