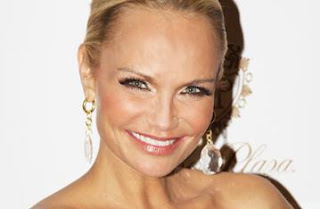 Promises Star Kristin Chenoweth Speaks Out on 'Horrendously Homophobic' Newsweek Article, Defends Sean Hayes
May 7, 2010
'This article offends me because I am a human being, a woman and a Christian.'

Kristin Chenoweth, the Promises, Promises star who was nominated for three Broadway.com Audience Awards on May 7, has stepped up on her soapbox. The Broadway favorite logged onto Newsweek.com to comment on an article on the website called “Straight Jacket” that suggests that gay actors struggle with playing straight characters. Ramin Setoodah, the openly-gay author of the article, specifically singles out Chenoweth’s leading man, Sean Hayes (calling his casting a problem--”the big pink elephant in the room”), and the recent appearance on TV’s Glee by Tony nominee Jonathan Groff.

"I couldn't stay silent on this one," Chenoweth wrote on Twitter after posting the response. Because she deserves as big as a soapbox as is available, we reprint Chenoweth’s comments below, with thanks to Newsweek.com.

As a longtime fan of Newsweek and as the actress currently starring opposite the incredibly talented (and sexy!) Sean Hayes in the Broadway revival of Promises, Promises, I was shocked on many levels to see Newsweek publishing Ramin Setoodeh’s horrendously homophobic “Straight Jacket,” which argues that gay actors are simply unfit to play straight. From where I stand, on stage, with Hayes, every night — I’ve observed nothing “wooden” or “weird” in his performance, nor have I noticed the seemingly unwieldy presence of a “pink elephant” in the Broadway Theater. (The Drama League, Outer Critics Circle and Tony members must have also missed that large animal when nominating Hayes’ performance for its highest honors this year.)

I’d normally keep silent on such matters and write such small-minded viewpoints off as perhaps a blip in common sense. But the offense I take to this article, and your decision to publish it, is not really even related to my profession or my work with Hayes or Jonathan Groff (also singled out in the article as too “queeny” to play “straight.”)

This article offends me because I am a human being, a woman and a Christian. For example, there was a time when Jewish actors had to change their names because anti-Semites thought no Jew could convincingly play Gentile. Setoodeh even goes so far as to justify his knee-jerk homophobic reaction to gay actors by accepting and endorsing that “as viewers, we are molded by a society obsessed with dissecting sexuality, starting with the locker room torture in junior high school.” Really? We want to maintain and proliferate the same kind of bullying that makes children cry and in some recent cases have even taken their own lives? That’s so sad, Newsweek! The examples he provides (what scientists call “selection bias”) to prove his “gays can’t play straight” hypothesis are sloppy in my opinion. Come on now!

Openly gay Groff is too “queeny” to play Lea Michele’s boyfriend in Glee, but is a “heartthrob” when he does it in Spring Awakening? Cynthia Nixon only “got away with it” ’cause she peaked before coming out? I don’t know if you’ve missed the giant Sex and the City movie posters, but it seems most of America is “buying it.” I could go on, but I assume these will be taken care of in your “Corrections” this week.

Similarly, thousands of people have traveled from all over the world to enjoy Hayes’ performance and don’t seem to have one single issue with his sexuality! They have no problem buying him as a love-torn heterosexual man. Audiences aren’t giving a darn about who a person is sleeping with or his personal life. Give me a break! We’re actors first, whether we’re playing prostitutes, baseball players, or the Lion King. Audiences come to theater to go on a journey. It’s a character and it’s called acting, and I’d put Hayes and his brilliance up there with some of the greatest actors period.

Lastly, as someone who’s been proudly advocating for equal rights and supporting GLBT causes for as long as I can remember, I know how much it means to young people struggling with their sexuality to see out & proud actors like Sean Hayes, Jonathan Groff, Neil Patrick Harris and Cynthia Nixon succeeding in their work without having to keep their sexuality a secret. No one needs to see a bigoted, factually inaccurate article that tells people who deviate from heterosexual norms that they can’t be open about who they are and still achieve their dreams. I am told on good authority that Mr. Setoodeh is a gay man himself and I would hope, as the author of this article, he would at least understand that. I encourage Newsweek to embrace stories which promote acceptance, love, unity and singing and dancing for all!
Posted by Robalini at Sunday, May 30, 2010