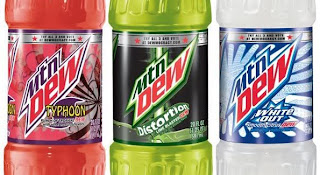 Okay, this whole thing is at least a little bit insane—but maybe that’s what Mountain Dew is going for. In its never-ending search for the next extreme Dew flavor, the company launched its “Dewmocracy” campaign in 2008. You may recall that we Taste Tested that first batch. Our favorite flavor in that bunch—Voltage—was the winner, which we all felt really good about. We proceeded to dance the night away in Grant Park and tout the dawn of a new era. (Until it became clear that Voltage was just going to compromise on health care and backpedal on some of its strongest promises.)

For the current round of Dewmocracy, the Dew people really spun out of control while reaching out to (presumably) young people. Allow me to cut and paste:

“During June and July 2009, DEW Labs trucks drove around the U.S. giving fans a chance to try seven never-before-tasted flavors of DEW. The mobile tour reached more than 200,000 fans and was the first step in harnessing the collective intelligence of DEW drinkers. In addition to the truck tour, we also sent tasting kits to 50 DEW fanatics. These super fans were given all seven different flavors, a DEW video camera and three tasks: Taste. Debate. Vote. At the end of this phase, the seven flavors were narrowed down to three: Lime Blasted DEW, Punch of Tropical DEW, and Smooth Citrus DEW. These three final flavors were sent to the DEW Labs community—a group of 4,000 of our most passionate DEW fans—so that they could pick their favorite one. Once they tried all three flavors, DEW Labs split up into three Flavor Nations and banded together in collaboration to build out other elements of their favorite flavors.”

Phew. That’s a lot to sip on, I realize, so just take a minute to soak in the caffeine-spiked sensation. I don’t know about you, but I always thought that snack and soda flavors were invented by guys in white coats who were just secretly trying to figure out how to cram addictive ingredients into everything. When it came to taste, I just assumed that these old white guys took samples home to their children and determined which one they’d chug the most of without dying. And maybe that’s the way other companies actually, ahem, Dew it. But not here. This was (and continues to be) an incredibly complex, overcomplicated process that most Americans probably don’t understand or care to understand, much like the electoral college. There was also a contest to name these things and design the cans, with $10,000 prizes. This is serious soda business.

ANYWAY. We’re down to three flavors, and they’re in stores already. You can vote online at Dewmocracy.com for your favorite. (But you don’t HAVE to vote. A majority of Americans won’t.) Your choices, with their full names: Typhoon (“Punch of Tropical DEW”), Distortion (“Lime Blasted DEW”), and White Out (“Smooth Citrus DEW”). They arrived in our office in a heavy metal Dewmocracy-branded ammo case, which was overnighted to us. It weighed 10 pounds and contained one can of each of the three finalists. 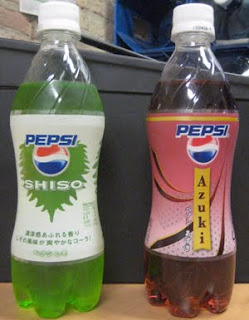 We also happened to have a couple of unusual Japanese Pepsi flavors in the refrigerator—azuki and shibo. Azuki refers to the red bean that’s seen pretty frequently in Japanese dishes. (Lots of Japanese restaurants offer azuki ice cream, for instance.) It isn’t a particularly sweet taste, but it’s pretty common over there. We were unfamiliar with shiso, which is sub-billed on the bottle as “Japanese Refreshing Flavor.” Our resident Japanese genius Jun could only tell me that it’s a “leafy green;” Wikipedia says it’s an herb in the mint family, often eaten with chicken or sushi, or even on pizza, like basil.

The taste: Here we have examples of two completely opposite approaches to soda-flavor innovation, neither necessarily better than the other: The Dew flavors play it pretty safe, while the Japanese Pepsi flavors, unsurprisingly, go pretty far out. That’s probably because the Dewmocracy campaign plays by the rules: Each of these new flavors has, at its core, the essence of Mountain Dew, that unmistakable-yet-unplaceable citrus tang. For you, the voter, that means a certain level of comfort is already in place. Even if you don’t like the seasoning, you’ve still got a little bit of Dew at the heart of the drink. That also means that it’s easy to shrug your shoulders and say stuff like, “It’s like a slightly red-tasting Mountain Dew.”

Still, we carefully considered each new Dew flavor, letting them breathe, smelling their corks, and dispensing them only in the finest carafes. “White Out: Smooth Citrus” was the clear winner in our labs, because it was the least effusively sweet. It was indeed smooth, and would probably make a nice mixer for some classy vodka. “Distortion: Lime Blasted” ratcheted up the intensity, tipping the scales in favor of something slightly sour, though at the same time still very sweet. “Typhoon: Punch Of Tropical Dew” didn’t do much for anybody: Sometimes when a brand reaches too far outside its comfort zone, it tastes like store-brand fizzy punch. But all was not lost, because Mountain Dew is asking for us to vote only for our favorite. And as much as it pains us to vote for the Caucasian, “White Out” was the winner by far.

These Japanese Pepsi flavors have no tether to the taste of original Pepsi—and no desire to have any sort of cola taste or identification. This is a proud Pepsi, with a reputation built on respect for tradition, but unafraid to innovate. Sadly, for American palates, that’s not necessarily a good thing. When you’re expecting a sweet sugar blast, being hit with a sharp, mint-like herb flavor can be a little jarring. Same goes double for azuki, which in spite of its artificial color and sugary smell, does indeed taste like beans. Neither was terrible, and we probably would’ve had more measured reactions if we were expecting Vitamin Water. But there’s plenty of sugar in all of these, though none of that wildly manufactured high-fructose corn syrup flavor we’ve come to know and love.

•“Yep, that’s smooth. So smooth, it’s pretty much indistinguishable from Slice. Where’s the X-TREEM?”
•“It tasted slightly of coconut and lime.”
•“It’s the bastard child of Mountain Dew and cream soda.”
•“Definitely a member of the cream-soda family. Perhaps the wacky cousin, but you could still tell it is related.”
•“The most refreshing and drinkable of the bunch. I’d fancy some of this with a smidge of rum.”
•“The Crystal Pepsi of Dew, minus any flavor.”
•“I couldn’t taste anything.”

•“That isn’t half-awful. It’s pretty strongly limey. You almost can’t taste the chemicals and the high-fructose corn syrup.”
•“It’s regular Dew with a melted lime Fla·Vor·Ice.”
•“Tastes like your rudimentary lemon-lime beverage. This would probably go well with vodka.”
•“They removed all the citrus from regular Mountain Dew and added a capful of lime juice.”
•“The best of the lot, but needs to be more assertive. Steal the taste from Jarritos Lime Soda.”

•“Carbonated punch. Kinda bland, but not bad. Pretty much like red Kool-Aid with some bubbles.”
•“Tasted like a watermelon Jolly Rancher.”
•“Just too damn sweet.”
•“Almost has some sort of cough-syrupy taste. I doubt I could finish a whole can of this guy.”
•“Like soda you’d get at a church potluck.”
•“Lies somewhere between Code Red and Gatorade, like an EXTREME soda sandwich.”

•“This tastes more like shampoo than anything else that’s ever crossed my lips. And not even good shampoo—some cheap Suave crap.”
•“The first sip tasted slightly of plant. Then it tasted like lime and mint, and the mint was so strong that it reminded me of toothpaste.”
•“The soda version of a fresh-cut-grass scratch-and-sniff sticker.”
•“I was not expecting the minty flavor, but it actually wasn’t too bad. I can see where the leaf is represented, as it does smell and taste slightly like grass.”
•“Green tea with mint and grassy flavors. I’d say it’s unique.”
•“Lawn clippings and Granny Smith apples? It’s hard to nail down.”
•“Tastes like Play-Doh rolled around in cut grass.”

•“Oh God, I don’t know what’s worse, that someone decided to make red-bean-paste Pepsi, or that it actually tastes this much like red-bean paste.”
•“It’s like the makers of Pepsi joined forces with the people at Jones Soda specifically just to gross me out. This is incredibly disgusting.”
•“Carbonated beverage and bean flavor should not go together.”
•“Like Vitamin Water with bubbles. Not too sweet.”
•“Really delivers on the azuki bean flavor. I’m not saying that’s a good thing.”
•“It’s floral but not fruity, with a starchy aftertaste.”
•“If it was a little less sweet, I might actually drink the red-bean Pepsi.”
•“I keep thinking about the liquid from canned kidney beans.”

Where to get it: The Mountain Dew flavors should be available everywhere, but only for a few months—then two get voted off the island, and one will remain. The Japanese Pepsi flavors are generally limited-edition, but we found them at napajapan.com
Posted by Robalini at Sunday, May 16, 2010