The Empire Strikes Back Turns 30, As Do Fans’ Psychic Scars 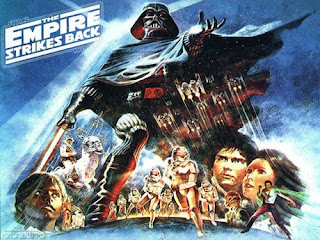 There is an episode of Lost titled “Some Like it Hoth,” in which Hurley, the portly Floridian played by Jorge Garcia, travels back in time to 1977 with the express goal of writing the script for The Empire Strikes Back before George Lucas gets around to it. He figures he can make “a couple of improvements.” I’m not sure what he could be thinking, because, as far as I’m concerned, The Empire Strikes Back is not only the perfect science-fiction movie. It might just be the perfect movie.

Today is the 30th anniversary of the release of The Empire Strikes Back, a film most Star Wars fans consider the best of the franchise’s six films. Just three years after Star Wars revolutionized the blockbuster, Empire redefined it again, proving that a film that took place in outer space and featured light sabers and blasters could also be smart and, yes, depressing. If watching Star Wars was kind of like being on an amusement-park ride—smiles for everyone!—watching The Empire Strikes Back might be more comparable to getting a root-canal. Han Solo would have gladly traded what happened to him in Empire for full set of root-canals. The Empire, seemingly defeated at the end of the first movie when Luke Skywalker blew up the Death Star, struck back in a big way, and it was ugly.

In truth, The Empire Strikes Back had a lot going against it. Being the sequel to the most successful film of all time, Star Wars, raised expectations to an unprecedented level. Sure, there was no Internet to fuel speculation, but there were magazines such as Starlog that sent fans into a frenzy by printing every unsubstantiated rumor about the upcoming sequel’s plot. (Luke, Han, and Leia travel through time to present day Earth? Really, Starlog? Are you sure you’re not thinking of Star TREK?) Meanwhile, the accurate facts were anxiety-inducing enough: the shoot was way over budget, and George Lucas had decided not to direct this installment, handing over the duties to Irvin Kershner.

George Lucas likes to defend his comparatively lame prequels (Episode I, II, and III) by saying that they are kids’ movies. That, he suggests, is why all those thirty-something Star Wars nerds don’t appreciate the new movies. I’m calling bullshit on this. Has Lucas actually seen Empire? Empire is a lot of things, but it’s certainly not a kids’ movie. How do I know? Because I saw that movie when I was five-years-old and it pretty much fucked me up for life.

The Empire Strikes Back was the first film that I ever saw in a movie theater. (The second was Ordinary People, which also fucked me up, but I will not be writing a 30th anniversary story about it.) All I knew about the story of Star Wars was what I had been told by upperclassmen (i.e. second graders) and what I had deduced from playing with my already vast collection of Kenner action figures. Having not seen the film, I wound up forging some pretty strange alliances. In my world, it wasn’t Han, Luke, Chewbacca, and Leia; it was Han and his trusty sidekicks Greedo and Bossk. How ironic is that?

On May 21, 1980, my parents agreed to take me to see The Empire Strikes Back. That day, my innocence died a little. From what I had been told about Star Wars, I expected a fun-filled ride. Yeah, that didn’t happen. What I saw was C-3PO get blown into a million pieces; Luke Skywalker cut off the head of Darth Vader only to see his own face (you think that scene is trippy now, try it as a five-year-old), then, later, get his hand severed by his own father; and Han Solo get frozen in Carbonite and, for all I knew, killed. Actually, my parents got me to the film a little late, so the first piece of action I ever saw on a proper movie screen was Luke Skywalker getting slashed in the face by a Wampa—a Wampa that later got his arm cut off. Again, with all due respect to George Lucas, this is not a fucking kids movie!

All this was especially upsetting because, thanks to Irvin Kershner, I felt genuine concern for these characters. Kershner got absolutely terrific acting performances out of Mark Hamill, Carrie Fisher, and, yes, even Harrison Ford (who, let’s admit it, completely phoned in his performance in Return of the Jedi). This is the same reason Lost resonates where other shows fail. It’s not about how crazy or weird the setting is; it’s always about the characters. Anyone can do “weird”; not everyone can do “compelling.” Kershner understood this, whereas Lucas either doesn’t understand it or doesn’t care. This is why the Star Wars prequels failed. Empire doesn’t even have that complex of a plot: Heroes get attacked, heroes try to escape and get their asses kicked in the process. The end.

Empire’s plot taught a generation of children that when life gets you down ... it’s probably only going to get worse. The most positive people I know all love Return of the Jedi; the cynics love Empire. When my parents would ask me why I never got too excited about, well, anything, I just wanted to scream back, “Because, when I had an impressionable mind of mush, you took me to see The Empire Strikes Back!” It taught me that, yeah, no matter how hard of a fight you put up, the bad guys will still win. In 1981, I finally saw a re-release of Star Wars. My parents acted as if they had replaced a dead pet goldfish with a new alive version. “See,” they said, “ they’re all O.K.!,” as if Star Wars came chronologically after Empire and as if I had the brainpower of a Taun-Taun. It made it worse; I knew their fate. “Hey, great, you blew up the Death Star. Laugh it up now, guys. You’re about to get your asses kicked.” But that’s what made Empire great. I cared that much.

I recently asked Jorge Garcia what he actually could improve about Empire, and even he admitted he didn’t agree with his character, “I don’t know if I’d want to touch The Empire Strikes Back. It’s definitely risen to the top of the trilogy. I loved how it ended with so much dissonance. It was the tragedy of them all.” The real tragedy are people—Lucas among them—who write off the original Star Wars films as movies for children. Thirty years ago today, a generation of cynical Star Wars fans were born. It’s hard to imagine a “kids’ movie” released today having that much of an impact—about as hard as imagining anyone, in 2032, caring about the 30th anniversary of Attack of the Clones.
Posted by Robalini at Monday, May 31, 2010