Giant hexagon of clouds spins on Saturn while clouds disappear from Jupiter
Saturday, May 15, 2010
by Mike Adams, the Health Ranger
Editor of NaturalNews.com

(NaturalNews) Here at NaturalNews, we normally report on Earthly events, but right now some rather grand events are taking place in our solar system that you may want to know about.

For starters, there's the odd fact that one of Jupiter's huge red stripes -- which is really a massive storm system many times larger than planet Earth -- has suddenly disappeared. Known as the "Southern Equatorial Belt", this storm system isn't exactly permanent: Jupiter's belts undergo striking transformations every 10 - 15 years, according to astronomers.

Far more bizarre and mysterious is something that NASA's Cassini spacecraft first noticed in 2007. There is a large rotating hexagon circling the north pole of Saturn.

This isn't some conspiracy theory. It's not some sort of far-fetched interpretation of random organic structure. It is quite clearly a massive hexagon, and it's circling the north pole of Saturn as we speak. And by "massive", I mean this hexagon is larger than the planet Earth.

Straight from the NASA website: "This is a very strange feature, lying in a precise geometric fashion with six nearly equally straight sides," said Kevin Baines, atmospheric expert and member of Cassini's visual and infrared mapping spectrometer team at NASA's Jet Propulsion Laboratory, Pasadena, Calif. "We've never seen anything like this on any other planet. Indeed, Saturn's thick atmosphere where circularly-shaped waves and convective cells dominate is perhaps the last place you'd expect to see such a six-sided geometric figure, yet there it is."

The hexagon, according to NASA, is 60 miles thick (deep) and an astonishing 15,000 miles wide.

That means four Earths would fit inside it. Yes, it's really that big. And of course, it seems entirely unnatural. Clouds don't form hexagon shapes and then maintain those structures as the edges orbit the center. Looking at this shape, it is difficult to explain it as "natural."

But that's not all there is to see here.

The all-seeing eye pyramid inside the hexagon

As I was studying this animation from NASA, something struck me as particularly interesting. Inside the hexagon there's a three-sided pyramid shape. It appears quite clearly as a lighter-shade triangle set against the background of the hexagon. Imagine a pyramid placed on top of the hexagon and you'll see it.

There's even more: Inside the pyramid is the shape of the all-seeing eye. You can clearly see it in the center of the pyramid shape, which is inside the hexagon.

Here's a still image from the NASA animation: 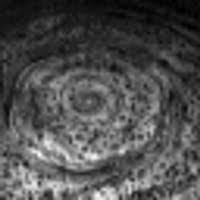 In it, you can just barely make out the shape of an inverted pyramid, plus two concentric circles in the center. Here's an overlay of lines showing the structure of the pyramid, plus the all-seeing eye: 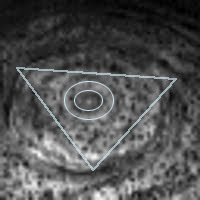 Now here's where this gets even more bizarre...

The all-seeing eye and the pyramid

Do you recognize this all-seeing eye with the pyramid? If not, just whip out a dollar bill from your pocket and glance at the back. There it is!

Yes, your U.S. currency contains the exact same image: An all-seeing eye, centered inside the top of the pyramid, looking over you from the back of a dollar bill.

Here's a zoomed-in image showing you this from the back of a U.S. dollar bill: 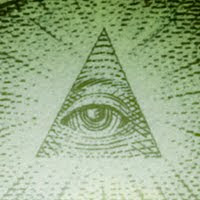 Please note what you're thinking right now as you're reading this. So far, I have not presented anything other than what is evident. There is a spinning hexagon of clouds on Saturn's north pole. Inside the hexagon is a triangle (pyramid). Inside the triangle are two concentric circles that look a lot like a human eye.

This shape looks a whole lot like the pyramid with the all-seeing eye on the back of the U.S. dollar.

Notice I haven't mentioned anything about any conspiracy, or aliens, or anything of that kind. These are just observations of the world around us.

Granted, they are fascinating observations. In fact, if you told most people what I've printed here in this article so far, they would think you were absolutely nuts.

And yet all I've done so far is republished NASA photos from the Cassini spacecraft and shown pictures from the back of U.S. currency. I've also pointed out some eerie similarities between the two.

But anyone with half a brain, upon seeing these pictures, would begin to wonder: Is this just a coincidence? And why is there a 15,000-mile wide spinning hexagon on Saturn in the first place?

I've mentioned this to quite a few people, and no one I talked to was even aware of this. So what's it doing there?

There are really one two possibilities for explaining the giant hexagon on Saturn: It is either a natural phenomenon or it was intelligently designed. (Well, I suppose there's a third possibility: That the whole thing is some sort of grand NASA hoax and the pictures were faked... but to what end?)

I can't wait to see the debates about this on our Facebook page, by the way, because "intelligently designed" could include anything: God, an alien race, a supernatural being, a previous Earthly civilization, a civilization from a parallel universe... who knows?

"Intelligently designed" means some conscious, intelligent being (or group of beings) intentionally created it. If so, you'd have to wonder: For what purpose? What would a giant spinning hexagon on Saturn actually accomplish?

Cymatics and the physical structure of sound

The far more likely explanation for the giant hexagon on Saturn may be that it is a natural phenomenon. And the only phenomenon I'm familiar with that might explain this involves the field of cymatics.

Cymatics is the study of how sound can alter the physical structure of materials, creating interesting structural patterns. To see this for yourself, you can turn a stereo speaker on its edge (with the speaker facing up), then place a liquid pudding of corn starch and water on top of a layer of plastic wrap, on top of the speaker. When you crank up the music, the corn starch creates bizarre and fascinating shapes due to the expression of the structure of the sound.

See an example of this "DIY cymatics" on YouTube:

I've been thinking that the giant hexagon on Saturn could theoretically be caused by very low-frequency sound waves emanating from some sort of geological action on the planet's surface. Perhaps these sound waves are being focused toward the north pole of the planet in much the same way that earthquake shockwaves can "bounce" off subterranean geological features. These sound waves could theoretically create a "cymatic" effect that we're seeing as a giant hexagon swirling around the pole.

It sounds far-fetched, I know. But not nearly as far-fetch as "aliens built it." When it comes to bizarre phenomena like this, all the explanations sound far-fetched.

You can come up with your own theory to explain all this, of course. But make no mistake: There is a giant hexagon of clouds 15,000 miles wide swirling around the north pole of Saturn, and even NASA has no idea why or how it got there. Who or what maintains the hexagon structure and keeps the clouds swirling in a six-sided geometric pattern?

Or is this a "natural" event taking place on a massive scale? If it's natural, it would demonstrate that nature can create some astonishingly complex (and large-scale) designs in the worlds around us. That's particularly interesting because the FDA believes nature is incapable of creating even a single plant-based nutrient that has any beneficial effect whatsoever on the human body.

There's a lot of denial in Washington about the power and "creativity" of nature. Maybe those folks should look toward the heavens and take note of what's really happening in our universe... because some of it is pretty darned spectacular.

Please let us know YOUR thoughts on this giant hexagon on Saturn. Is it a NATURAL event? Was it created by MAN? Was it put there by GOD? Is it an elaborate NASA HOAX?

Chime in with your own thoughts at http://facebook.naturalnews.com where our readers love to discuss and debate fascinating ideas!

About the author: Mike Adams is a natural health researcher and author with a passion for sharing empowering information to help improve personal and planetary health He has authored and published thousands of articles, interviews, consumers guides, and books on topics like health and the environment, reaching millions of readers with information that is saving lives and improving personal health around the world. Adams is a trusted, independent journalist who receives no money or promotional fees whatsoever to write about other companies' products. He has created over 100 CounterThink cartoons and produced several popular hip-hop songs on socially-conscious topics. He also launched an online retailer of environmentally-friendly products (BetterLifeGoods.com) and uses a portion of its profits to help fund non-profit endeavors. He's also the founder of a well known HTML email software company whose 'Email Marketing Director' software currently runs the NaturalNews subscription database. Adams is currently the executive director of the Consumer Wellness Center, a 501(c)3 non-profit, and pursues hobbies such as Pilates, Capoeira, nature macrophotography and organic gardening.
Posted by Robalini at Wednesday, May 26, 2010