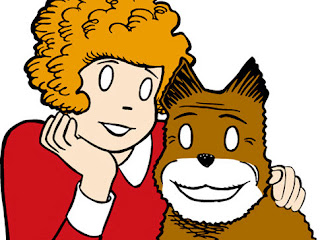 After 86 years in the Daily News' comics, there are no more tomorrows for "Little Orphan Annie." The plucky redhead with the saucer-shaped eyes appears in her final newspaper strip on Sunday, June 13.

"It's kind of painful," said cartoonist Ted Slampyak, who started drawing Annie, Sandy and Daddy Warbucks six years ago. "It's almost like mourning the loss of a friend."

The strip's debut came on Aug. 5, 1924, exclusively in the Daily News. Cartoonist Harold Gray, who created the character, drew her until his death in 1968. Daddy Warbucks' adopted daughter starred in a radio series in 1930, a Broadway smash in 1977 and a $35 million movie in 1982.

Tribune Media Services reluctantly decided to cancel the cartoon, which was running in less than 20 newspapers - including The News.
Posted by Robalini at Wednesday, May 26, 2010

Email ThisBlogThis!Share to TwitterShare to FacebookShare to Pinterest
Labels: Annie