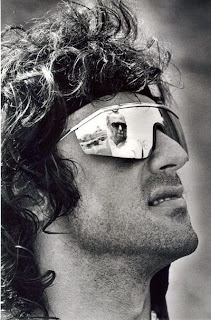 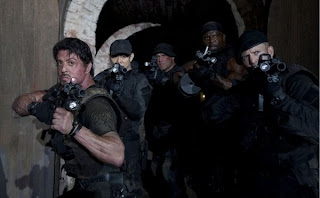 The lights were down low in Sylvester Stallone's Beverly Hills office on a recent afternoon, so it was impossible to see the 64-year-old movie star's eyes behind his plum-tinted sunglasses. His snug Italian suit emphasized his still-muscular frame as he sat ramrod straight. His face doesn't move much. So he seemed like a statue, until he started recounting the moment when he knew he was becoming expendable. 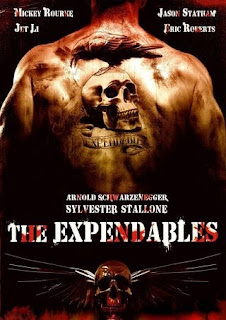 "It was that first Batman movie," he said, referring to the 1989 film starring Michael Keaton, an actor never known for biceps. "The action movies changed radically when it became possible to Velcro your muscles on. It was the beginning of a new era. The visual took over. The special effects became more important than the single person. That was the beginning of the end."

Yes, even action heroes get misty-eyed at times. In the 1980s, Stallone was one of the biggest names in Hollywood in movies in which he punched, shot or (in a film rightly called "Over the Top") arm-wrestled his way past overpowering odds as an especially sinewy everyman. And, despite the arrival of an era when actors such as Keaton, Johnny Depp or Tobey Maguire could play the action hero, Stallone never really went away. He didn't become small; Hollywood's collective bench press did.

"I wish I had thought of Velcro muscles myself," Stallone mused. "I didn't have to go to the gym for all those years, all the hours wedded to the iron game, as we call it," he said, a reference to weight training.

But Stallone is back in the heavyweight game this week, at least for a day. On Thursday, he will be in San Diego at Comic-Con International, the pop-culture expo that runs through Sunday at the convention center and where Velcro muscles are practically handed out at the door. He's not going there to get vengeance on the nerd heroes (although that might actually be entertaining), he's going to promote his ridiculously retro film "The Expendables," due in theaters next month.

The movie is a low-tech, deliriously un-ironic return to the sort of commando movies that were a popular cinematic sector during the Reagan era. Movies just like it get relegated to the small ballrooms at Comic-Con all the time, but "The Expendables" will be front and center in Hall H, the 6,500-seat hangar of a room where Angelina Jolie, Nicolas Cage, Will Ferrell and Jeff Bridges will be part of a celebrity parade during the four-day expo.

Stallone plays Barney "The Schizo" Ross, a mercenary who has assembled a team of paid killers who look like the models for a "United Colors of Harley-Davidson" ad campaign. Statham plays Schizo's second-in-command, Lee Christmas. A mission takes the team to South America where nasty surprises await. Rourke plays a tattoo artist and sometime spiritual advisor; Roberts is the bad guy.

In the eyes of a certain Sacramento politician, the lineup looks like a dream team. "The movie is fantastic with a terrific cast," Schwarzenegger said. "It’s like 'The Magnificent Seven' or 'The Dirty Dozen' — every character is totally believable because of their natural real-life personas."

Willis and Schwarzenegger play mysterious kingpins who meet with Stallone's character for a fleeting underworld summit staged in a church — perhaps they are the trinity of American action-movie heroes for fans of a certain age. The three actors have a history — they were partners in the 1991 launch of Planet Hollywood, the theme-restaurant chain, and seeing them meet on-screen is the tantalizing lure of the movie's trailers and posters. Stallone said his old screen rivals showed up for no pay as a gesture of support.

Stallone, who co-wrote the screenplay with Dave Callaham, said he was "a nervous wreck" on the day of the shoot. And, as a reflective director, it got him thinking about the three actors he would be guiding.

"Each of us chose a different style. Arnold was king of the one-liners. Bruce was witty and talkative; he had all these verbal pirouettes. And I was pretty silent. My guys seemed haunted, a lot of the time, but Bruce's guys were usually Teflon. Arnold was relentless, like this perfect machine. People asked if I could have played the Terminator. Are you kidding? Not a chance, I never could have played the Terminator."

Stallone didn't complete the corollary, but Schwarzenegger could never have inhabited the role of everyman Rocky Balboa, the neighborhood lug with hound-dog eyes and a heart full of sadness who never gives way to surrender.

Willis, for his part, has promoting to do for his big film called "Red," based on the comic, in which he portrays a former black-ops agent, but says he enjoyed "The Expendables" so much he'd like to work with Stallone again. "He's a very efficient and creative director; the experience on 'The Expendables' was great."

Schwarzenegger, whose return to Hollywood is a growing topic of interest, has enjoyed being back on a movie set: "Sly was so well-organized on the set with the way he communicated, not just with the actors but also with the crew. It was amazing how smooth the whole operation was."

The word from the state capital is that the governor will not be at Comic-Con, but Willis will appear with Stallone on Thursday, which will surely send the genre-loving fans of Comic-Con into delirium. Director Edgar Wright, who was going to Comic-Con to promote "Scott Pilgrim vs. the World," said he got goose bumps thinking about the reception that the old war horses would get. "It's going to be like when 'Rocky' won the Oscar for best picture. I can't wait."

The trio's work in "Die Harder," "T2: Judgment Day" and Stallone's "Rocky III" helped propel Hollywood down the path of franchise obsession, for better or worse. (Below on the right is a photo of Stallone back in the day, on the set of "Rambo III.") The high-concept, high-explosives approach to cinema makes him a founding figure of sorts at Comic-Con, where action heroes never die, they just become video-game characters.

As robust as the Comic-Con reception might be, it might not even be the highlight of Stallone's day. He and other "Expendables" cast members will stop Thursday night at Camp Pendleton to screen the movie for Marines.

Here are some things you will encounter if you sit in the dark with "The Expendables": compound fractures, stab wounds, an abusive boyfriend beat down, bodies flying over sandbags in slow motion, testicle jokes, fiery debris, tropical airstrips, a major amount of C4 explosives, cocaine kilos stacked in a cave, water torture, cigarette-burn torture, tough love and tattoos. The movie reeks of cordite and is drenched in testosterone — there are women in it, but they're treated pretty much as props.

There's a scene in which a villain is engulfed in flames and staggers toward death. The director wasn't satisfied with it, so, despite the expense, Stallone went back to shoot more footage and ordered up some CG effects. Now, he proudly explains, the immolation has an exclamation point, and "The Expendables" is the first film in history in which a good guy goes up to an on-fire bad guy and punches him in the face.

Stallone is candid that the movie lurches and stalls a number of times. It was supposed to be a comedy, but then, after seeing early footage, he realized directing a commando comedy was a lot harder than it sounded.

"I think it would have been a disaster," he said, adding that a documentary team recorded much of the production, for posterity. "The Expendables" ended up as a straight-forward wolf-pack adventure that recalled some textures of the old "Missing in Action" films (which starred Chuck Norris, who somehow didn't get called to duty).

Stallone is a man of action but also has aspired to be a warrior poet, in his own way. Critics have savaged him through the years, with some notable exceptions (he was praised for his nuanced turn in the 1997 film "Cop Land," for instance). He got decent reviews in "Rocky Balboa" (which dropped the Roman numerals for the digital age), but his retro commando film may be marching to a beat that leaves young audiences confused.

Sitting in his office — next to shelves full of action figures, prop weapons and a latex decapitated head plucked from the set of a Rambo film — Stallone explained the mindset of the characters in his new film, but he seemed to be talking about more than movies.

"When the battle is on, that's easy. When boxers are in the ring, they're simple. It's when the fight is over, that's when the other fight, the real fight, begins. That's the problem. It's like Frank Capra said in his book: Reality started when he drove through the gates of Paramount. The surreal life started when he drove back home. Why do some actors want to do nine films a year? It's their element. They're more comfortable in the unreal world."

"Expendables" is a curious film to handicap, commercially. The cast and Comic-Con will stir interest, but will the film win over young fans whose word-of-mouth is essential? Lionsgate saw the hard-knuckle comic-book movie "Kick-Ass" spark public interest and press but fail to deliver any big bang; the studio picked up the Stallone project, which, conceivably, could be a rerun.

Stallone doesn't seem fazed. He's more interested in chewing on the story of the film and the old lions who reload for one more mission. "People that spend time in a foxhole — they're never going to find that relationship anywhere else again. … Everything else pales next to that. When you think about the second World War vets — more than even the Vietnam vets — there's a brotherhood. They're 90 years old now, and they're still wearing the hats. The way they feel about each other. Time stopped. That was the ultimate of life. Everything after it was anticlimactic. After that it just wasn't the same."

Stallone paused, going back to statue mode. Then he found the metaphor he was searching for, behind those shades. "After that, their life was straight-to-video." 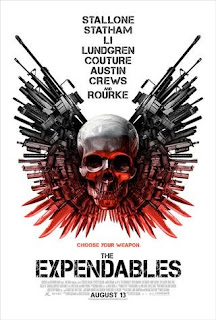