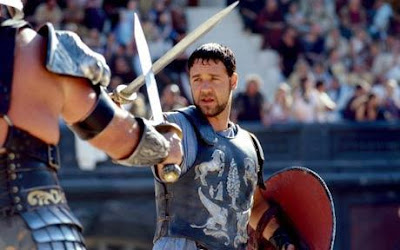 Gladiator tomb discovered by archeologists
Archeologists have unearthed the tomb of a Roman general thought to have inspired the character played by Russell Crowe in the film 'Gladiator'.
By Nick Squires in Rome
16 Oct 2008

Elements of the life of Marcus Nonius Macrinus were incorporated into the character of Maximus Decimus Meridius, played by Russell Crowe.

The 1,800-year-old stone mausoleum on the banks of the River Tiber was hailed by experts as an "extraordinary discovery" and one of the most important Roman finds for decades.

It was built to contain the remains of Marcus Nonius Macrinus, a proconsul and a favourite of Marcus Aurelius, who ruled as emperor from 161 AD to his death in 180 AD.

Macrinus was born in Brescia, in northern Italy, and won victories leading Roman legions into battle.

He became a confidant of Emperor Aurelius, being appointed a proconsul in Asia Minor and describing himself as "chosen out of the closest friends".

Elements of his life were incorporated into Maximus Decimus Meridius, the fictional character for which Crowe won an Oscar in the 2000 film Gladiator, directed by Ridley Scott.

In the award-winning film, Maximus is a battle-hardened general and a protégé of the emperor, just as Marcus Nonius Macrinus was.

The intricately carved marble tomb, complete with a stone inscription identifying it as that of Macrinus, was found near the Via Flaminia, one of the arterial roads which led in and out of ancient Rome.

The jumble of broken columns, friezes and stone blocks was discovered during the demolition of a warehouse, along with remarkably intact parts of the original Roman road.

"It's been at least 20 or 30 years since a relic of this importance has come to light in Rome," said a senior archeologist, Daniela Rossi.

Over the centuries parts of the tomb crumbled into the Tiber but enough has been recovered during months of painstaking excavation work that experts are discussing the possibility of reconstructing it as the focus of an archeological park.

In the award-winning film, Emperor Marcus Aurelius, played by Richard Harris, is murdered by his ruthless son Commodus, who declares himself emperor and sets about destroying Maximus, ordering the murder of his wife and child.

Slave traders take the shattered Maximus to North Africa, where he is sold to a gladiator school and trained as a fighter.

Returning to Rome seeking revenge, he eventually kills Commodus in a bloody showdown in the Colosseum, which was famous for its gladiatorial contests.

The film's scriptwriters also based the character of Maximus on Spartacus, who led a slave revolt against Rome in the 1st century BC, and Narcissus, a wrestler who brought Commodus' reign as emperor to an abrupt end by strangling him.

Commodus is believed to have been the only Roman emperor to have taken part in gladiatorial contests.

Last year archeologists in Rome found a mosaic which they believe depicts a favourite sparring partner of the emperor, named Montanus.

The mosaic shows the gladiator holding a trident over a prone opponent who he has apparently defeated in hand-to-hand combat.
Posted by Robalini at Tuesday, October 21, 2008

If you always write interesting, I will be your regular reader. skin care Read a useful article about tramadol tramadol