Steal Back Your Vote! 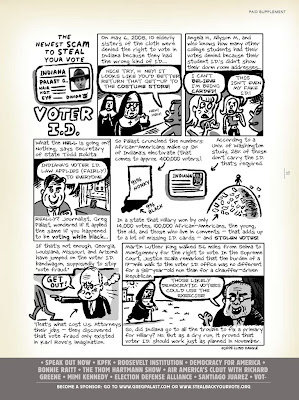 So, these ten nuns walk into a polling station and... Oh, you’ve heard that one?

What you didn’t hear is that, besides the Sisters of the Holy Cross who lost their vote because their drivers licenses expired, 144,896 other legal voters were told to scram in this year’s primary -all caught attempting to vote without a license. The rejected were, disproportionately, African-American,according to data from the University of Washington.

Apparently, the idea for this racially rancid rule came to Karl Rove while he was buying his Pampers: “If I try to cash a check at a grocery store, I have to show an ID. Why not for voting?”

The answer, Karl, is that for a century, Indiana folks have voted without photo ID with not a single known case of voter identity theft.

It’s true the law nabbed Shirley Preiss, a 98-year old Democrat whose driver’s license expired. Drop that ballot, Shirl, and no one gets hurt.

Santiago Juarez sees some truth in Rove’s remarks. We met with Santiago in Espanola, New Mexico, where he was running a registration drive among low-riders, the young Mexican-Americans who cruise the street in hopping, bopping, neon-outlined Chevys. He says, “The same poverty and racism that keeps these kids from getting credit cards keeps them from getting ID.” A young Mexicana he escorted to the polls was turned away from her first-ever attempt to vote for failure to produce an ID to the white pollworker’s satisfaction, despite Santiago’s protest.

“She said, well, something you can’t print, and refused to try again. She said, ‘They don’t want me to vote, anyway.’”

Get the guide now - all copies will be sent out via priority mail. If your group would like to distribute the Steal Back Your Vote guide please contact keri (at) gregpalast.com for special rates.

After you've picked up the comic book get the t-shirt. Wear it into the polling place and tell them that they can't steal your vote! Support the fund by picking up the Steal Back Your Vote t-shirt by the cool people over at Clothing for the American Mind. A portion of every purchase goes to support the Palast Investigative Fund.
Posted by Robalini at Tuesday, October 28, 2008