"Voting fraud itself is a fraud" 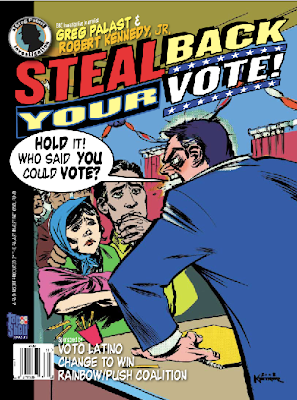 "Voting fraud itself is a fraud"
Buzzflash.com interviews Greg Palast 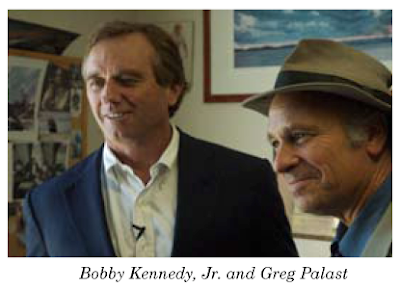 "However, the Republican cry of 'Vote Fraud!' has become the cover for purges and challenges to legal voters by the millions. I even tracked down and filmed some of these so-called fraudulent voters handed me from a GOP list. Every one was a legal voter."

-- Greg Palast, Intrepid Investigative Reporter and Author
* * *
Greg Palast and BuzzFlash go back to the election of 2000. At that time, large progressive political news sites were hard to come by – and there was only one investigative reporter who was able to unravel the theft of the Florida election: Greg Palast.

Greg didn’t just expose the mugging of democracy. As a University of Chicago trained researcher, he was able to detail how Katherine Harris used an outside vendor to create caging lists that prevented legitimate voters from casting their ballots. In fact, Greg has a laptop presentation that actually shows you the lists that Harris’s office worked from in keeping minorities from voting.

Of course, Greg’s investigation on vote theft – which has branched out widely in the intervening years – is persuasive and thorough enough for the BBC and British newspapers, but not for the corporate press in America! We kid you not. To this day, Palast is effectively banned from reaching the mainstream American voter because television stations and big papers are owned by companies that don’t want to rock the vote. It might hurt their tax cuts or efforts to deregulate media ownership.

BuzzFlash thought that now would be a good time to revisit with our most interviewed expert on BuzzFlash, Greg Palast. After all, we have an election coming up.
* * *
BuzzFlash: You have been investigating the coordinated and vigorous GOP effort to suppress and steal votes since the theft of the election in 2000. You and Robert F. Kennedy Jr. just did a BBC Documentary on what nefarious voter suppression tactics the Republicans have in store for us in 2008. Can you summarize some of the methods that the GOP are using to disenfranchise non-Republican voters prior to the election, to prevent them from voting during the election, and to keep their votes from being counted after the polls close?

Greg Palast: It's ugly. Consider: - In the swing state of Colorado, we found that the Republican Secretary of State wiped out 19.4% - one in five - voter names in an unnoticed mass purge. - In swing-state New Mexico, in the February caucus, one in nine Democrats found their names missing from the voter rolls supplied by the State. The elections supervisor of San Miguel County - whose own name was missing from the rolls - has no confidence the state contractors will fix it. Our statistical analysis showed there was a direct relationship between your name and your race and income. The poor and the dark were disappeared. - In Indiana, you heard about 10 nuns who lost their vote because their ID - drivers' licenses - had expired (they were all over eighty). But what about the others? We've calculated that 143,000 others were turned away - disproportionately Blacks and new voters. And so on and so on.

BuzzFlash: BuzzFlash has been covering one public relations effort by the Republican National Committee to create a false context for claiming voter fraud. In short, they have been attacking a national community organizing group called ACORN with news releases, lawsuits, surrogate assaults, etc., falsely claiming (as they did in 2004 and 2006) that ACORN is engaged in the massive illegal registration of primarily minority voters. Can you explain the significance of the ACORN slander by the RNC?

Greg Palast: As RFK and I report, there are only about SIX voters found guilty of federal voting fraud in a year. SiX! Out of 178 million registered voters. So the GOP (and Fox and CNN) are running stories about ACORN signing up zillions of illegal voters. Yep, there are a handful of phony names - but 'Mary Poppins' has never shown up to vote. However, the Republican cry of 'Vote Fraud!' has become the cover for purges and challenges to legal voters by the millions. I even tracked down and filmed some of these so-called fraudulent voters handed me from a GOP list. Every one was a legal voter. Tell us a bit about the site and downloadable comic book that you launched with Robert F. Kennedy, Jr. on how to prevent the theft of millions of votes by the Republicans, yet again in 2008. The website is: http://www.stealbackyourvote.org.

Greg Palast: Our Rolling Stone report that's out this week is all about how they've stolen so many legitimate votes. The comic book, which includes the Rolling Stone findings also includes the SEVEN WAYS TO STEAL IT BACK. And the whole thing is illustrated brilliantly by comic crazies Ted Rall, Lukas Ketner and Troubletown's Lloyd Dangle. I loved doing it. You can download the whole comic book for a penny or more (donate more please) at StealBackYourVote.org. And better yet, you can order bunches of the comic book there as well (and see the short movies). Cool eh?

BuzzFlash: Can you briefly explain the role of ProsecutorGate at the DOJ in efforts to suppress the Democratic vote in 2006? How did this fit in with Karl Rove’s grand voter suppression and theft plan?

Greg Palast: You betcha! Fired prosecutor David Iglesias told us something astonishing: He said that he was fired because he refused to arrest innocent citizens for voter fraud that didn’t happen. That's obstruction of justice. It was all about creating a hysteria over fraudulent voters that didn’t exist. This is what Iglesias basically said: "They wanted some splashy pre-election indictments [Rove and the RNC] that would scare these alleged hordes of illegal voters away." Only the voters were legal.

BuzzFlash: Isn’t there one bright spot? You cut your teeth on GOP voter disenfranchisement with brilliant reporting on how the Bush campaign team, Jeb Bush, and Katherine Harris prevented tens of thousands of valid minority voters from voting through a scheme to use an outside vendor, ChoicePoint, to create an inaccurate list of felons who could not vote in 2000 in Florida. Hasn’t the current GOP governor, Charlie Crist, had the right to vote of ex-felons restored?

Greg Palast: Crist is a duplicitous phony. On the one hand, he pretends they'll let ex-cons vote as in almost every state. On the other hand less than a handful of the half million ex-cons in the state have been able to get through the insane rigamarole required to actually register. In most states ex-cons can vote like anyone else.

BuzzFlash: As a follow up, from a practical matter, don’t the Republicans have to be within a certain striking distance to steal the election. If Obama keeps trending up, or ends up with a double-digit popular vote victory, how could the GOP steal the election? After all, if Nader weren’t on the ballot in Florida – despite all the nefarious Republican voter suppression and theft – Al Gore would be president, right?

Greg Palast: That's what RFK and I say: you can't steal ALL the votes ALL the time.

BuzzFlash: Okay, it’s less than a month before the election, what can anyone do to halt another theft of the White House?

Greg Palast: Go to STEALBACKYOURVOTE.ORG. Get the comic book. Now was that so difficult?*

BuzzFlash: For 8 years, you’ve been covering this issue. Some others have joined you over time and it’s a bit of a movement, albeit still relatively small. But, as in 2000, not much has changed with the corporate media. They are still pretty much ignoring the clear evidence of a coordinated GOP effort to keep non-Republicans from voting and to steal votes wherever they can. Is there any reason to think that they might awaken to their journalistic responsibility to report on the mugging of democracy?

Greg Palast: Zero. That's why we have BuzzFlash. Bless you. [*In brief, Palast advises voters to vote early; do not mail in your ballot; check on your registration in advance to make sure there is not a glitch; don't vote a provisional ballot; volunteer on election day; go to the polls with someone for mutual support; and use the resources that you can get at stealbackyourvote.org.]

To view the documentary on Republican election theft just released and available for free on the Internet (with the participation of Palast), go to: http://www.freeforall.tv

The May 17, 2007, BuzzFlash interview with Palast, "Greg Palast, Author of Armed Madhouse, on How Rove May Have Already Stolen the 2008 Election": http://www.buzzflash.com/articles/interviews/061

For a BuzzFlash Editor’s Blog on how the Republicans Use A.C.O.R.N. to achieve racist goals, go to: http://www.buzzflash.com/articles/editorblog/128

[BuzzFlash Afternote: The GOP assault on the right of every American to vote is so widespread that we can barely touch upon it in one interview. Of course, there is the whole additional issue of electronic voting theft, for example. The Republican effort to disenfranchise legitimate voters is a vast criminal enterprise.] 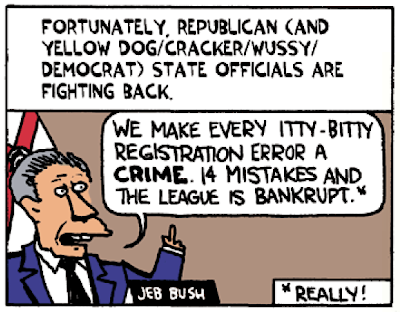 This is the Real example of Real Fraud, organised by Real Toshiba, Real Mitsubishi and Real MC Logistics in Russian Federation :

Japanese companies are famous for their high-quality service provided worldwide.
Any partner of a Japanese company expects a discreet and trustworthy business way. Unfortunately, it doesn’t look as it seems.

In our case, Japanese corporations’ representatives working in Russia and the CIS have elaborated an excellent fraud scheme including money-laundering, kickback clients and employees, asset misappropriation etc.

The scheme runs as follows:

1. Toshiba Corporation serving as a cover generally doesn’t sign official distribution contracts in Russia and the CIS. Russian nationals such as Mr. Vadim Danilov (Toshiba fake official trader) are hired by the corporation. In addition, all transactions are based on pledging Toshiba managers’ word of honor.

3. Defective appliances covered by an insurance company are sent to Russia from a warehouse Kouvola, Finland as new ones via a fake Toshiba trader.

5. It is strongly recommended by the Japanese companies to make all payments using off-shore banks since Toshiba prefers not to be responsible for anything if its Russian clients have any claims and complaints.

So, it has been shown the Japanese corporations use fraud schemes and transactions to snatch large sums and frame up hired managers and Russian big companies.