'The Godfather,' at Its Greatest 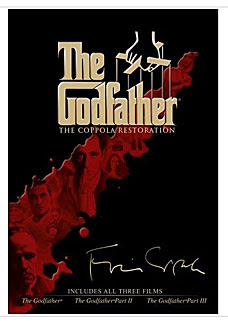 Stop what you're doing and clear a space on that crowded home entertainment center shelf. Room must be made for "The Godfather: The Coppola Restoration," ($69.99) the box set that releases today and delivers one of the most influential series in cinema history, looking better than it ever has before.

A team of technicians spent more than a year meticulously restoring the three "Godfather" films, which also make their debut today on Blu-ray disc ($124.99). The results? A sun that shines even brighter on Connie Corleone's wedding day in "The Godfather"; blacker-than-midnight shadows in Michael Corleone's study in "The Godfather Part II"; and blood that pops with crisper crimson color during the Atlantic City shoot-out in "The Godfather Part III." In short, anyone who loves the movies simply must experience filmmaker Francis Ford Coppola's classics -- or at least the first two, since, let's face it, the third one most of us could take or leave -- through these DVDs, which capitalize on modern technology in a way that only enhances Coppola's and cinematographer Gordon Willis's original vision.

For those whose adoration of The Godfather" borders on religious fervor -- you know these people, they're the ones who can never resist a "Leave the gun. Take the cannoli" joke -- this collection is the definitive one to own. Everything that came with the 2001 box set, including several featurettes, 34 deleted scenes and three solid commentary tracks by Coppola, is here. But so is another disc with an all new slate of excellent extras, including one that explains every detail behind the restoration of the movies in more technical terms than some fans may have ever thought they needed.

Another smart addition: "Godfather World," a featurette that has great fun digging up homages to the mafia saga in everything from "The Simpsons" to "The Sopranos" to a recent Audi commercial. A wide range of admirers -- "Sopranos" creator David Chase, "South Park" mastermind Trey Parker, Coppola pal Steven Spielberg -- also appear in the interviews to explain why these movies have so widely influenced pop culture. (As actor Joe Mantegna puts it, "The Godfather" is "the Italian 'Star Wars.'")

Given the intense popularity and acclaim earned by this trilogy, some viewers may be surprised to realize how perilously close "The Godfather" came to never happening at all. The half-hour documentary "The Masterpiece That Almost Wasn't" delves into all that ugly behind-the-scenes history. For Corleone family scholars, many of the details -- about the shake-ups at Paramount in the late '60s and early '70s, the studio's desire to remove Coppola from the production and Al Pacino's near failure to be cast as Michael -- will sound very familiar. But for those just discovering these epics, the documentary does a fine, concise job of explaining this Oscar-winning enterprise's place in cinema history.

As fantastic as "The Coppola Restoration" is, the box set is not without its flaws. For one, none of the major cast members participate in any of the featurettes, and their absences are keenly felt. Surely Pacino, Diane Keaton, Talia Shire, Robert Duvall and Robert De Niro have some memories and insights about "The Godfather" to share. Even more maddening, though, is "'The Godfather' on the Red Carpet." Based on the title, I assumed this featurette would consist of archival footage from the original film's premiere back in 1972. Instead, it contains nothing more than a series of interviews with actors who showed up at the premiere of this year's handheld horror movie "Cloverfield," another Paramount picture. It's great that these young stars share a fondness for these unforgettable films. But as extras go, this one stands as an offer you can, and should, refuse.

Most Oddly Comforting Bonus Point: With the economy on shaky ground, many Americans may find themselves living in fear of getting fired. Maybe some of them will feel better to know that, as "The Masterpiece That Almost Wasn't" and Coppola's commentary explain, the director lived with that same fear. And this guy is one of his generation's finest filmmakers. "It's a good reminder of what a delicate thing it is to create a really fine work of art, in any discipline," notes San Francisco Chronicle film critic Mick LaSalle. "And how dangerous it is to interfere with that."
Posted by Robalini at Wednesday, October 15, 2008