Sharpton and 7 Others Guilty in Sean Bell Protest 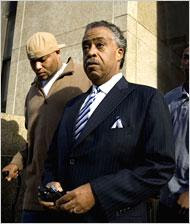 October 9, 2008
Sharpton and 7 Others Guilty in Sean Bell Protest
By JOHN ELIGON

In some ways, it was reminiscent of another cool, sunny day six months ago.

There was a packed courtroom held rapt by a judge’s words. The Rev. Al Sharpton was among those front and center. And Sean Bell, the Queens man who was killed in a hail of 50 police bullets on his wedding day two years ago, was the primary reason anyone was there.

Mr. Sharpton and seven others were facing disorderly conduct charges after they blocked several bridges and tunnels around the city in May during a protest of the April 25 acquittal of three detectives charged in Mr. Bell’s death. More than 200 people were arrested, and all but eight cases were dismissed.

And so, after two days of court proceedings, Judge Larry R. Stephen of Manhattan Criminal Court rendered his verdict on Wednesday. He found Mr. Sharpton and his co-defendants guilty of disorderly conduct, which is a violation and does not result in a criminal record.

Although Judge Stephen said he was “sympathetic to the underlying causes which gave rise to the protests and demonstrations,” he added, “The evidence is overwhelming.”

“My view is, if you decide to take a bullet for the team, you should not complain about the consequences that flow from that act,” Judge Stephen said.

The consequences in this case were negligible.

Although prosecutors asked that the defendants be fined $250 each and be ordered to perform community service, Judge Stephen spared them additional jail time (they were all locked up for a couple of hours at most after their arrests), and simply ordered them to pay $95 in court fees. (Mr. Sharpton said he would pick up the tab for each defendant and would pay with $50 bills to represent the number of shots fired at Mr. Bell’s car in November 2006.)

Michael A. Hardy, a lawyer for the defendants, said he would consult with them before deciding whether to appeal.

After the judge rendered his verdict and sentence, Wylie M. Stecklow, another lawyer for the defendants, reminded the judge that they were supposed to make statements before sentencing. Judge Stephen gave each of them three minutes, but did not budge on his decision.

In April, when a Supreme Court judge in Queens acquitted the three detectives, many Bell supporters were in tears, and an angry Mr. Sharpton left the courthouse without saying a word. He blasted Justice Arthur J. Cooperman’s verdict on his radio show later that day. Some Bell supporters got into a confrontation with photographers outside the courthouse.

The reaction on Wednesday was a stark contrast.

Mr. Sharpton seemed to welcome the verdict. He stood before Judge Stephen and thanked him for acknowledging that his protests were peaceful. He also apologized to anyone whom his protests might have inconvenienced, but said he hoped that the civil disobedience made an impression on them.

“I hope the city would think about how the pedestrians who couldn’t walk that day, and the drivers who couldn’t drive, were no different than the three young men who sat in the car that day and were shot at,” Mr. Sharpton said.

Outside the courthouse, Mr. Sharpton, flanked by Joseph Guzman and Trent Benefield, the men who were in the car with Mr. Bell the night they were shot outside a Queens strip club, spoke of the differences between the verdict on Wednesday and the one rendered six months ago.

“It feels a lot better hearing this judge in Manhattan at least respect the outrage and the feeling of the people, rather than act like we’re criminals because we don’t understand why three unarmed men were shot at 50 times,” Mr. Sharpton said.

After Mr. Bell left his bachelor party at the club in Queens early on Nov. 25, 2006, he and his friends exchanged words with a man outside, according to testimony at the trial of the detectives. The detectives said they thought someone with Mr. Bell had a gun, so they followed them to a car around the corner. They said they fired after Mr. Bell refused orders to stop and tried to speed off in his car. Mr. Guzman and Mr. Benefield were wounded.

In some ways, Wednesday’s guilty verdict further emboldened Mr. Sharpton’s cause. He and several co-defendants were quick to point out that while they were convicted, the detectives who fired at Mr. Bell’s car were not.

“For the judge to find us guilty of any crime when the police were found not guilty of anything, there’s no justice,” said Sara Flounders, one of the people convicted on Wednesday.
Posted by Robalini at Wednesday, October 15, 2008