50 FACTS THAT SHOULD CHANGE THE USA 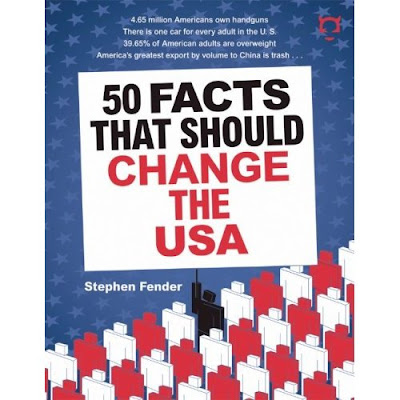 One in eight Americans live in poverty.

There is one car for every person over eighteen in the U.S.

Americans have the shortest vacations in the developed world.

New York, NY — Are Americans being told the full story about what's going on in the United States today? In this book, you'll learn hard facts that will open your eyes and minds to a very different reality than the official versions. Following the popular 50 Facts That Should Change The World, this new book puts America under the microscope telling us that:

Over twice as many Americans claim to go to church as actually do.

America has some of the worst high schools and most of the best universities in the world.

In America charity begins at home, and in the red states.

2.9 million Americans claim to have been abducted by aliens.

In America only five percent of serious criminal cases are tried before a jury.

In America you are what you drive.

Stephen Fender presents a vibrant, proud, and yet critical portrait of the world's most powerful but least understood nation. Hilarious, sad, shocking, and riveting, 50 FACTS THAT SHOULD CHANGE THE USA just might be the most important book you read this year. Every issue is simply presented with explanation and analysis backed by thorough references.

50 FACTS THAT SHOULD CHANGE THE USA by Stephen Fender
Published in November 2008
The Disinformation Company Ltd.
Trade Paperback * US$15.95 * 344 pages

Email ThisBlogThis!Share to TwitterShare to FacebookShare to Pinterest
Labels: Disinformation