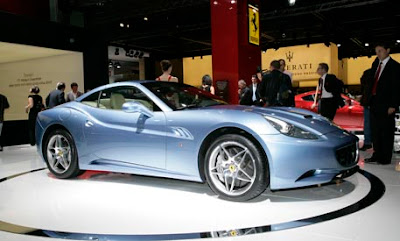 Talk about dragging the launch of a car out! The first official photos of the Ferrari California were published months ago. But here at the Paris show is the California's true world premier. And it's worth the wait to see it in the flesh. From a fully retractable hardtop to a dual-clutch transmission to the first-ever production Ferrari with a front-mounted V-8, the Ferrari California is packed with the latest and greatest from the engineers in Maranello...despite the fact the California is not Ferrari's flagship model.

Ferrari says the California "is aimed at owners who desire a car which embodies everything the Prancing Horse represents in terms of sporty design and innovation, but also seek a car with greater versatility than ever." This newest prancing horse is not a "baby Ferrari." It is, in fact, a brand-new model complementing, and similar in size to, the racier F430 — except the California has more flexibility in packaging. In addition to having a power retractable hardtop, the California can be ordered in a 2+2 configuration — children seating only — or for more storage space for weekend outings. There is even a trunk pass-through for skis for those who want to hit the slopes in the winter.

Despite a raft of new technologies, the California doesn't forget Ferrari's past. The car's styling uses several nostalgic elements from the Ferrari 250 GT California Spyder from the late 1950s and early 1960s. Those elements include the large air intake on the hood, the side gills just aft of the front wheels, near identical grillework and similarly swoopy rear fenders. And photos don't do this car justice — we must say, the Ferrari California looks absolutely stunning in person.

Unlike the Ferrari Superamerica from a few years back, which featured a roof that simply flipped backward, the California will come only as a true retractable hardtop; when the top is down, the rear deck is completely flat — just like the Mercedes-Benz SL. The top is slick in its operation, and only takes 14 seconds to go from open to fully closed.

As with any Ferrari, the engine is the star. The 4.3-liter direct-injected flat-crank V-8 produces 460 bhp. Even more important is the car's use of Ferrari's first dual-clutch gearbox with not six speeds, as on every other recent Ferrari, but seven forward gears. Ferrari claims the California will be able to hit 100 km/h (62 mph) in less than 4 seconds.

In another dramatic move, Ferrari has swapped out its traditional double-wishbone suspension at the rear for a multilink setup on the California. And those amazing (but incredibly expensive, lightweight and fade-resistant) Brembo carbon-ceramic brake discs seen on so many Ferraris these days? Standard issue on the California.

Ferrari started production of the California late this summer in a brand-new building in Maranello. It will be on sale in Europe by the end of the year. U.S. sales will follow later, probably as a 2009 model and priced in the range of the F430.
Posted by Robalini at Thursday, October 30, 2008

Email ThisBlogThis!Share to TwitterShare to FacebookShare to Pinterest
Labels: Ferrari