How About A Bailout For America’s Family Farms? 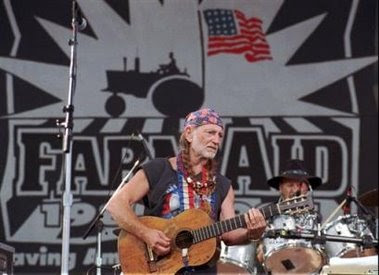 Nelson: How About A Bailout For America’s Family Farms?
Country music icon says just $1 billion out of $700 billion could get real economy back on track
Paul Joseph Watson
Prison Planet
Thursday, October 23, 2008

Country music icon Willie Nelson has a message for Hank Paulson and Ben Bernanke in the wake of the recent $700 billion dollar plus Wall Street bailout - how about a bailout for the desperate and struggling family farmers of America that are nearing extinction?

“I have written a letter as president of Farm Aid to whoever controls that money that we would like to have $1 billion dollars from that 700….$1 billion dollars is I think all we’ll need to turn the economy around if we start out taking care of our family farmers,” Nelson told The Alex Jones Show.

“We could put 10 million farmers back on the land, making a living out there raising food and fuel….and that $1 billion dollars I think would go a long way to changing our negative attitudes that we have and the confidence in ourselves and in our country right now,” said Nelson, adding that all foreclosures on farms should be halted immediately.

“I think that if we invested that $1 billion with our family farmers, we would begin to turn it around,” stressed the country music star, later joking that $100 billion would be an even better amount.

Nelson has been a multi-decade activist and vocal proponent for Farm Aid, and recently performed alongside Neil Young at the highly successful 2008 Farm Aid concert which was held at the Comcast Center in Mansfield, MA, having helped organize the first Farm Aid concert in 1985.

Farm Aid is a nonprofit organization whose mission is to keep family farmers on their land and support locally sourced, humanely-raised and organic food in the face of a gargantuan attempt on behalf of big agribusiness to squeeze the family farmer out of existence.

The letter that Nelson and fellow Farm Aid directors John Mellencamp, Neil Young and Dave Matthews sent to Congress points out, “When farms thrive, Main Street businesses and local communities thrive. Far from Wall Street, family farmers are creating real wealth, producing real value, growing from seeds and sunlight a product that nourishes us both physically and economically. Supporting diverse decentralized family farming will do far more for the stability and vitality of our country than a handful of global agribusiness corporations could ever do.”

“The proposed $700 billion bailout asks taxpayers to foot the bill without giving them the opportunity to share in any gains. A $1 billion investment in family farm agriculture would enrich us all, because we are all shareholders of the family farm. The return on investment in the family farm includes thriving local economies, nutritious food for better health, a safer and more secure food supply, a cleaner environment and more renewable energy.”

Nelson pointed out that when 8-10 million family farmers were on the land in America at the end of the second world war the economy was strong because, “Agriculture is the bottom rung on the economic ladder,” adding that the farmers became a target because they were a political problem.

“Let’s put out the fire now, we’ll figure out who started it later and that’s pretty much what we have to do, we have to stop the fire and stop the bleeding, and I think the best way to do that is still from the ground up, go back to our family farmer, he’s the one that started taking care of us in the beginning so let’s let him do it again,” Nelson concluded.
Posted by Robalini at Monday, October 27, 2008

TROY DAVIS, PLEASE REMEMBER THAT AMERICA IS NOT THE OLD SOUTH ~ AFRICA !

A $TATE ECONOMIC BOYCOTT OF GEORGIA INTERNATIONALLY WILL OBVIOU$LY BE THE END RE$ULT OF GEORGIA DECIDING TO MURDER A PO$$IBLE INNOCENT TROY DAVI$ WITHOUT A NEW AND FAIR TRIAL ?

THE INTERNATIONAL COMMUNITY NEEDS TO BEGIN A FORMAL INVESTIGATION INTO THESE US CONGRESSIONAL CRIMES AGAINST HUMANITY, AND HUMAN RIGHTS VIOLATIONS BEING INFLICTED ON poorer AMERICAN'S LIKE MR.TROY DAVIS OF GEORGIA !!!

HAVING BEEN DENIED APPEAL LAWYERS FOR THREE YEARS ON DEATH ROW IN GEORGIA MR. TROY DAVIS IS NOW BEING EXECUTED FOR A CRIME HE MIGHT NOT HAVE EVEN BEEN INVOLVED WITH !!!

SENATOR OBAMA PLEASE LET THIS COUNTRIES VOTERS KNOW YOUR FEELINGS AND THOUGHTS ABOUT A NEEDED FUTURE REPAIR AND RENOVATION OF OUR BROKEN JUDICIAL SYSTEM THAT CONTINUES TO ALLOW THE EXECUTION'S OF EVEN POSSIBLE INNOCENT AMERICAN’S LIKE TROY DAVIS OF GEORGIA ?????

BEING THE WEALTHIEST COUNTRY IN THE WORLD SENATOR OBAMA, DON'T WE NEED AS THE LEADERS OF THE FREE WORLD TO BEGIN ONCE AGAIN TO RE-INVEST THE PROPER MONIE$ IN OUR OWN US JUDICIAL SYSTEM, ASSURING ALL OF OUR CITIZENS THEIR RIGHTS TO FAIR TRIALS WITH PROPER LEGAL REPRESENTATION ???

DOES GOD NEED TO LOBBY OUR US CONGRESSIONAL LEADERS OF THE FREE WORLD ON BEHALF OF OUR poorer american’s SENATOR OBAMA,OR ARE YOU WATCHING OUT FOR THEM ??

***OUR US CONGRESS CONTINUES TO DENY MIDDLE CLASS AND WORKING POOR AMERICANS PROPER LEGAL REPRESENTATION EVEN THOUGH WRONGFUL EXECUTIONS & FALSE INCARCERATIONS CONTINUE ALL ACROSS AMERICA ???

*** 700 BILLION $$$ AVAILABLE FOR US BAILOUT, & NO $$$ FOR ALL POORER AMERICANS PROPER LEGAL REPRESENTATION ? SENATOR OBAMA, THIS JUDICIAL INJUSTICE HAS BECOME AN AMERICAN ART FORM, AND NO LONGER CAN BE KEPT HIDDEN OR SECRET FROM THE AMERICAN PEOPLE EVEN IF CERTAIN (501c3) U$ RELIGIOU$ LEADER$ HAVE BEEN $ILENCED ??

LETS ALL HOPE OUR MEDIA FRIENDS CONTINUE TO SHOW AN INTEREST IN REPORTING ON THIS AMERICAN HORROR FACING THESE (TENS OF THOUSANDS) FORGOTTEN AND TRAPPED POORER AMERICANS, AND HOW THIS PRESIDENTIAL CONTENDER HANDLES THIS VERY SERIOUS ISSUE FACING AMERICA’S LATINO AND BLACK AMERICAN COMMUNITIES ????

WITH 80% OF THE BLACK AMERICAN VOTERS SAYING THEY SUPPORT SENATOR OBAMA IN THIS PRESIDENTIAL ELECTION, IT IS ONLY FAIR FOR EVERYONE TO KNOW PRIOR BEING ELECTED OUR NEXT PRESIDENT OF THE UNITED STATES HOW THIS DEMOCRATIC SENATOR TRULY FEELS ABOUT THIS AMERICAN JUDICIAL INJUSTICE CONTINUING TO INFLICT GRAVE HARM ON THE BLACK & LATINO AMERICAN FAMILIES AND THEIR COMMUNITIES NATIONWIDE ??????

*** WHEN GOD’S FACE BECAME VERY RED *** THE US SUPREME COURT GAVE ENEMY COMBATANTS FEDERAL APPEAL HC RIGHTS LAWYERS AND PROPER ACCESS TO US FEDERAL COURTS,AND POORER AMERICANS (MANY EVEN ON DEATH ROW) ARE DENIED PROPER FEDERAL APPEAL LEGAL REPRESENTATION TO OUR US FEDERAL COURTS OF APPEAL, AND ROTTING IN AMERICAN PRISONS NATIONWIDE ?????????

**** INNOCENT AMERICANS ARE DENIED REAL HC RIGHTS WITH THEIR FEDERAL APPEALS ! THE AMERICAN PEOPLE ARE $LOWLY FINDING OUT HOW EA$Y IT I$ FOR MIDDLE CLA$$ AND WORKING POOR AMERICAN$ TO FALL VICTIM TO OUR U$ MONETARY JUDICIAL $Y$TEM.

****WHEN THE US INNOCENT WERE ABANDONED BY THE GUILTY **** The prison experts have reported that there are 100,000 innocent Americans currently being falsely imprisoned along with the 2,300,000 total US prison population nationwide.

***WHERE ARE AMERICA'S RELIGIOUS LEADERS ??????? Since our US Congress has never afforded poor prison inmates federal appeal legal counsel for their federal retrials,they have effectively closed the doors on these tens of thousands of innocent citizens ever being capable of possibly exonerating themselves to regain their freedom through being granted new retrials.

This same exact unjust situation was happening in our Southern States when poor and mostly uneducated Black Americans were being falsely imprisoned for endless decades without the needed educational skills to properly submit their own written federal trial appeals.

This devious and deceptive judicial process of making our poor and innocent prison inmates formulate and write their own federal appeal legal cases for possible retrials on their state criminal cases,is still in effect today even though everyone in our US judicial system knows that without proper legal representation, these tens of thousands of innocent prison inmates will be denied their rightful opportunities of ever being granted new trials from our federal appeal judges!!

Sadly, the true US *legal* Federal Appeal situation that occurs when any of our uneducated American prison inmates are forced to attempt to submit their own written Federal Appeals (from our prisons nationwide) without the assistance of proper legal counsel, is that they all are in reality being denied their legitimate rights for Habeas Corpus with our US FEDERAL COURTS and will win any future Supreme Court Case concerning this injustice!

For our judicial system and our US Congressional Leaders Of The Free World to continue to pretend that this is a real and fair opportunity for our American Middle Class and Working Poor Citizens, only delays the very needed future change of Federal Financing of all these Federal appeals becoming a normal formula of Our American judicial system.

It was not so very long ago that Public Defenders became a Reality in this country.Prior that legal reality taking place, their were also some who thought giving anyone charged with a crime a free lawyer was a waste of taxpayers $$.

This FACADE and HORROR of our Federal Appeal proce$$ is not worthy of the Greatest Country In The World! ***GREAT SOCIETIES THAT DO NOT PROTECT EVEN THEIR INNOCENT, BECOME THE GUILTY !

A MUST READ ABOUT AMERICAN INJUSTICE:
1) YAHOO 2) GOOGLE
(MANNY GONZALES THE KID THAT EVERYONE FORGOT IN THE CA PRISON SYSTEM.) ** A JUDICIAL RIDE OF ONES LIFE !

***Someone please tell our US Congress that the GED degree that Manny Gonzales acquired in prison is not a LAW DEGREE !!!!!!