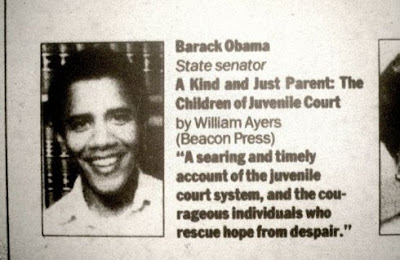 Democratic presidential candidate Barack Obama wrote a review of domestic terrorist Bill Ayers' book in 1997, calling it "searing" and "timely," according to a blogger who tracked down the original printed version of the endorsement since that was before the publication in which it appeared was digitized.

According to the blogger at Zombietime.com, Obama, who was an up-and-coming state senator at the time, endorsed Ayers' book called "A Kind and Just Parent: Children of Juvenile Court."

In the short review on Dec. 21, 1997, Obama in the Chicago Tribune calls Ayers' book, "A searing and timely account of the juvenile court system, and the courageous individuals who rescue hope from despair."

The documentation calls into question Obama's repeated efforts to distance himself from Ayers, who boasted as recently as 2001 of trying to bomb various federal buildings such as the Pentagon and wishing he had done more.

Obama has described Ayers and someone who lived in his neighborhood and with whom in worked on a school project, but he's denied any close link.

"I find it very hard — no, make that impossible — to believe that Barack Obama had 'no idea' who William Ayers really was, or that he had a past as a notorious domestic terrorist (as Obama's campaign has claimed) while serving on panels with Ayers and simultaneously praising Ayers' book in a major newspaper," the blogger wrote.

"I had seen mentions of the existence of this review in a very few media outlets, including CNN, National Review, American Spectator, and a handful of others. But because the review was published before the Chicago Tribune began digitizing and archiving its articles online, there was no direct Web link to the review itself — only citations of it. So, out of curiosity, I took it upon myself to visit a library in San Francisco, and using the library's Lexis-Nexis access and its archive of microfilm versions of major newspapers, including the Chicago Tribune, I finally tracked down a copy of the actual review itself," Zombietime said.

The endorsement came in part of the Chicago Tribune column called "Mark My Word," where Chicago leaders praised their favorite current books.

Ayers book had just recently been published by Beacon Press.

The blogger noted that Ayers, in his book, also mentioned Obama.

Ayers' wrote: "Our neighbors include Muhammad Ali, former mayor Eugene Sawyer, poets Gwendolyn Brooks and Elizabeth Alexander, and writer Barack Obama. Minister Louis Farrakhan lives a block from our home and adds, we think, a unique dimension to the idea of 'safe neighborhood watch': the Fruit of Islam, his security force, has an eye on things twenty-four-hours a day."

"So there's no question they knew each other," the blogger wrote.

On the Zombietime forum page, one participant wrote, "Obama is not running to change government he's running for overthrow government. Ayers wins."

"The more time that passes, the more obvious it becomes that the links between Ayers and Obama are multiple, and that Obama had to know about Ayers' criminal past," said another. "It certainly looks like he's hiding something."

On a Boston Globe forums page, the readers were concerned not so much about the relationship with Ayers, but Obama's repeated efforts to distance himself from Ayers.

"Personally I don't care too much about him associating with Ayers, the 60s were a turbulent time though bombing your own country is despicable; it bothers me a great deal that a presidential candidate can flat out lie and get away with it," wrote one contributor. "Just because many Americans are tired of Bush shouldn't mean we accept old style politics and deceit, but it seems to be the case this election."

The review came about the time, as WND reported, Obama's wife, Michelle, organized a university event in which she invited her husband and former radical Ayers to serve on a panel discussion about whether child murderers should be tried as adults.

Both Barack Obama and Ayers served on the side that opposed treating offending minors as adults.

Michelle Obama at the time was the University of Chicago's associate dean of student services and director of the college's Community Service Center, which sponsored the juvenile detention discussion Nov. 20, 1997.

She told the university's student newspaper she hoped the panel discussion would open a dialogue between members of the college and the broader Chicago community.

"We know that issues like juvenile justice impact the city of Chicago, this nation and – directly or indirectly – this campus. This panel gives students a chance to hear about the juvenile justice system not only on a theoretical level, but from the people who have experienced it," she said.

Panel leaders invited by Michelle Obama included her husband, who taught law at the university; Ayers, who was a university education professor; and four other speakers who had experience with Chicago's juvenile detention system.

Barack Obama was billed as a leader "who is working to combat legislation that would put more juvenile offenders into the adult system."

Ayers, promoting the panel event, told the student newspaper, "We should call a child a child. A 13-year-old who picks up a gun isn't suddenly an adult. We have to ask other questions: How did he get the gun? Where did it come from?"

During his Weathermen days, Ayers once famously commented, "Kill all the rich people. ... Bring the revolution home. Kill your parents."

In an ABC News interview, Obama described Ayers as "guy who lives in my neighborhood, who's a professor of English in Chicago who I know and who I have not received some official endorsement from. He's not somebody who I exchange ideas from on a regular basis."

But several other blogs earlier raised questions about the links between the two men. The Sweetness and Light blog, which first reported on Michelle Obama's panel event, commented "we all must be mistaken, since we have been repeatedly reassured that Mr. Ayers 'was just a guy who lived in the Obamas' neighborhood.'"

The two men also worked in 1994 on the Chicago Annenberg Challenge, founded by Ayers.

Also in 1995, the first organizing meeting for Obama's state senatorial campaign reportedly was held in Ayers's apartment. In a widely circulated article, WND first reported Obama served on the board of the Wood's Fund, a liberal Chicago nonprofit, alongside Ayers from 1999 to Dec. 11, 2002, according to the Fund's website. Tax filings showed Obama received compensation of $6,000 per year for his service in 1999 and 2000.

Ayers' wife, Bernadine Dohrn, also has served on panels with Obama. Dohrn, once on the FBI's Top 10 Most Wanted List, was described by J. Edgar Hoover as the "most dangerous woman in America." Ayers and Dohrn raised the son of Weathermen terrorist Kathy Boudin, who was serving a sentence for participating in a 1981 murder and robbery that left four people dead.

As WND reported, an FBI report claims Dohrn built and planted the bomb that killed a San Francisco police officer in 1970.

Ayers, a professor at the University of Illinois at Chicago, has admitted to involvement in the bombings of U.S. governmental buildings in the 1970s. The charges against him were dropped in 1974, however, because of prosecutorial misconduct, including illegal surveillance.

William Ayers is a professor of education at the University of Illinois at Chicago, with whom Barack served on the board of an education-reform organization in the mid-1990's. According to the Associated Press, they are not close: "No evidence shows they were "pals" or even close when they worked on community boards years ago ..." (http://www.breitbart.com/article.php?id=D93KD6Q00&show_article=1)

Smear groups and now the McCain campaign are trying to connect Obama to acts Ayers committed 40 years ago - when Barack was just eight years old. Here's what the New York Times reported on the connection (http://www.nytimes.com/2008/10/04/us/politics/04ayers.html)

But the two men do not appear to have been close. Nor has Mr. Obama ever expressed sympathy for the radical views and actions of Mr. Ayers, whom he has called "somebody who engaged in detestable acts 40 years ago, when I was 8."

Barack has publicly denouncedAyers' radical actions from the 1960's (http://blog.washingtonpost.com/fact-checker/2008/02/obamas_weatherman_connection.html):

Senator Obama strongly condemns the violent actions of the Weathermen group, as he does all acts of violence. But he was an eight-year-old child when Ayers and the Weathermen were active, and any attempt to connect Obama with events of almost forty years ago is ridiculous.