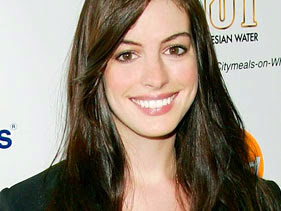 LOS ANGELES (Hollywood Reporter) - Anne Hathaway, who is generating buzz for her performance in "Rachel Getting Married," has signed for a role in "Alice in Wonderland," which Tim Burton is directing for Disney.

The movie, which stars Mia Wasikowska as Alice and Johnny Depp as the Mad Hatter, will use a combination of live action and performance-capture technology to tell the classic Lewis Carroll story.

Hathaway is playing the White Queen, a benevolent monarch who is deposed and banished by her sister, the Red Queen (Carter), who has an affinity for crying out, "Off with their heads!" The White Queen needs Alice to slay a creature known as the Bandersnatch.

Hathaway starred as Agent 99 in "Get Smart," and next appears in the horror thriller "Passengers." "Rachel Getting Married," an acclaimed drama in which Hathaway's character disrupts her sister's wedding, opened promisingly in limited release last weekend.

Carter, along with Depp, was seen last year in Burton's "Sweeney Todd: The Demon Barber of Fleet Street."