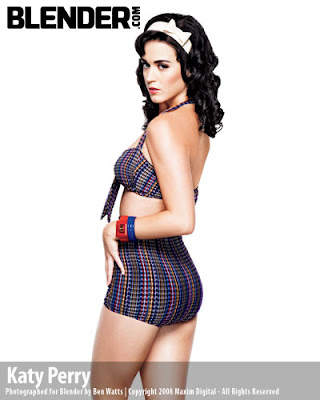 Even in the parking lot of a Six Flags in New Jersey, glamour never sleeps. Katy Perry is here today to rock the theme-park crowd as part of an MTV package tour. The boys in her band pile out of the bus one by one, in the usual rock-band way: rubbing their eyes, shaking their heads at the sun, staggering to their trailer. Katy Perry is on the bus, too, because, as her album title puts it, she is One of the Boys. However, there is one way in which she is not much like one of the boys: She does not want anyone to see her without makeup. To ensure this, she walks the hundred yards from the tour bus to the dressing room with her hands over her face, clutching a pink Victoria’s Secret bag.

Is she wearing heels? It’s a Six Flags parking lot. In New Jersey. On a Wednesday afternoon. Of course, she’s wearing heels.

Katy Perry likes makeup, likes clothes, likes having everyone’s attention. The stylists hunch over her, working on her eyelashes, her hair, her skin. It takes two hours. Perry sings an assortment of Queen songs to herself in the chair. Even when she’s supposed to be resting her voice, she is what your grandmother might call a “loudmouth”; it’s one of the reasons she’s delightful company.

A stylist mentions that she’s big news on the AOL home page today. Katy’s preacher mom was quoted in a U.K. tabloid calling her daughter’s music “disgusting.” Perry, whose mom came to three of her shows in California last week, dismisses the story as a lie. “Fine,” she says in exasperation. “I’ll just stop singing, if that makes everybody happy. Let the gangstas keep talking about raping and ganging and banging and let them have the airwaves. I’ll go away and never sing again, and then there will be world peace.”

She interrupts her own rant to check herself out in the mirror. She smiles: “Two degrees from a drag queen!”

Perry has always loved big displays of sequins and color. When she was a teenager, she would sneak into Universal Studios in Los Angeles, posing as a stylist. “I’d try on all the clothes, all these vintage gowns, and hope nobody would bust me,” she says rapid-fire, which is her usual pace. “I was a glamour ninja.”

These days, she’s the 23-year-old pop starlet behind “I Kissed a Girl,” the song that spent most of the summer at No. 1. She grew up born-again in Santa Barbara, California, with two pastors for parents. She began her musical career as Katy Hudson (her original surname) when she was just 17. Her first album, in 2001, had a song called “Growing Pains”: “I’m grateful to be part of the family tree/While the Man upstairs does his work on me.” One of the Boys is most famous for a song that goes, “I kissed a girl/And I liked it.” Sunrise, sunset.
---
Perry has a Jesus tattoo on her left wrist she got when she was 18. “I see it every time I’m playing guitar,” she says. “It’s looking back up at me. That’s where I come from, and probably where I’m going back to.”

She grew up with an older sister and younger brother in her parents’ ministry—“Evangelical, with a heavy Pentecostal flavor”—in a world of Christian school, Christian camp and church several times a week. “It was kind of an island,” she remembers. “We spoke in tongues. We knew there was this one way, and all the other ways were wrong.” In Perry’s house, deviled eggs were called angeled eggs. “I didn’t know enough to ask my mom, ‘How come we call them that? Everybody else calls them something else.’”

What she also didn’t know was that her parents hadn’t always been on the side of the angels. Both her mom and dad had their own rock & roll days, before they were born again. As Perry says proudly, “In terms of wild youth, they put me to shame.” Her mom grew up a debutante in Southern California, then ran off to see the world, with a tempestuous first marriage in Zimbabwe. She also briefly dated Jimi Hendrix in Spain. “He just came up to her in a club and picked her out.” Her dad was a West Coast scenester in the ’60s. “He was like a male Penny Lane,” Perry says, referring to the Almost Famous role that made a star out of another girl named Kate Hudson. He was an acid dealer who palled around with Timothy Leary and specialized in a potent strain of LSD called Strawberry Fields.

When Perry hit her teens, she began going out drinking. That’s when she found out about her parents’ wild hippie days. “I started spending Sunday mornings crying and hung over,” she says. “Because crying is what you do when you’re hung over. So my dad started telling me about when he was my age.” His testimony—the story of his past and his conversion—offered an example of how she could put her life right. She’s protective of her parents’ beliefs, even if she doesn’t share them anymore: “They found God at a time when they really needed to, and I believe in the God they found. My dad would have died from one tab of Strawberry Fields too many if he hadn’t found God.”

To read the rest of this article pick up Blender magazine on newsstands now, or subscribe today.
Posted by Robalini at Monday, October 20, 2008

Great article. Very very helpful. I just want to add as a suggestion, that please do not drive while you are drunk. These days most of the accidents occur due to alcohol or using cell phone while driving. POP Displays