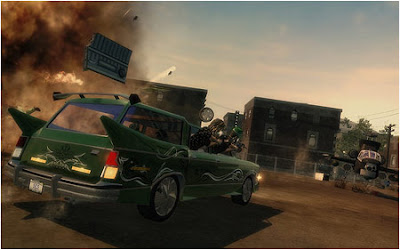 This follow-up to 2006 hit Saints Row is an over-the-top gangbanger paradise that drops you on the mean streets of Stilwater where you wreak all kinds of havoc on foot and behind the wheel. Unlike Grand Theft Auto you don’t need to unlock all of the boroughs in Saints Row 2; everything is accessible right from the get-go. While en route to take down the heads of three rival gangs, race your pimped-out ride through bustling streets and take down enemies and other obstacles in your way. Rob this truck, destroy that drug farm, hop on Jet Skis and ride through sewers under the city. It’s all in a day’s work.

A more significant distinction between Saints Row 2 and GTA lies in the degree of player customization, from your character’s voice and gang appearance (we recommend ninjas or 1970s pimps and hos), to fighting style, graffiti tags, taunts and vehicle types. Seriously, there are some major cosmetic and game-play options you can toy with, ensuring no two games play out the exact same way. Despite controls that take some getting used to (try the cruise control option), and production values not on par with Grand Theft Auto IV, players can tackle nearly 50 increasingly wacky missions and even indulge in co-op or head-to-head multiplayer modes for added replayability. On its surface Saints Row 2 might appear to be a rip-off of that “other” urban sandbox game, but once you play through a couple of missions you’ll see the differences that give THQ’s badass sequel its own legs.
Posted by Robalini at Thursday, October 23, 2008

greetings to all.
I would first like to thank the writers of this blog by sharing information, a few years ago I read a book called costa rica investment in this book deal with questions like this one.

Hello .. firstly I would like to send greetings to all readers. After this, I recognize the content so interesting about this article. For me personally I liked all the information. I would like to know of cases like this more often. In my personal experience I might mention a book called Generic Viagra in this book that I mentioned have very interesting topics, and also you have much to do with the main theme of this article.

Ӏ was suggesteԁ thіs webѕite by my cousin.

I'm not sure whether this post is written by him as no one else know such detailed about my trouble. You're
amazing! Thanks!