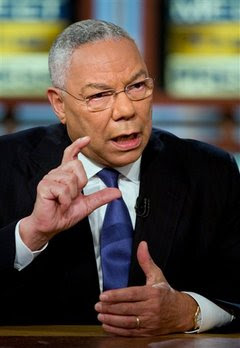 Colin Powell has made bizarre comments that echo the recent declaration by Democratic VP candidate Joe Biden that there will be an “international crisis” early into Barack Obama’s presidency that will test the new president by forcing him to make unpopular decisions.

Speaking on meet the press two days ago, Powell officially endorsed Obama and also made the following statement:

“The problems will always be there and there’s going to be a crisis which will come along on the 21st, 22nd of January that we don’t even know about right now.

Watch Powell make the comment at 2.35 into the following video:

Is Colin Powell referring to a theoretical crisis that could occur at any time? If so why does he choose a specific date, within the first two days after the inauguration? Also why does he refer to general problems that the new president will have to deal with in a separate context? We are already in an economic crisis, everyone knows that, so what new crisis is Powell talking about?

Whatever you read into Powell’s comments, they sound somewhat bizarre, particularly as they come on the back of Joe Biden’s “guarantee” of a “generated crisis” to “test the mettle” of the new leader within six months of the new presidential term:

What does Biden mean by “generated crisis”? It is an undeniably strange term to use.

His reference to John F. Kennedy indicates that Biden may have been referring some kind of geopolitical crisis in the vain of the Cuban missile crisis of April 1961. The confrontation between the United States, the Soviet Union, and Cuba at the height of the Cold War came within the first four months of JFK’s presidency.

Obama’s running mate made the comments at a fundraising event in Seattle two days ago, on the same day Powell also spoke of a coming crisis.

We shouldn’t be surprised at Powell’s comments however, given that the former Secretary of State seemingly has a knack for predicting events before they take place.

Previous to the beginning of the Iraq war in February 2003, an audio tape containing a voice described as that of Osama Bin Laden was touted as proof positive of Al Qaeda links with Saddam Hussein.

Hours before the tape was discovered and aired by TV channel Al Jazeera, Powell announced in the US Senate that a “Bin Laden tape is coming proving Iraq’s links with Al-Qaeda.”

This led some to raise the question how does Colin Powell know what Al Jazeera are going to broadcast before they do?

In an amazing and timely coincidence, the tape came barely a week after Powell’s attempts to link Al Qaeda and Saddam in his botched presentation of lies and exaggerations before the UN Security Council.
Posted by Robalini at Monday, October 27, 2008