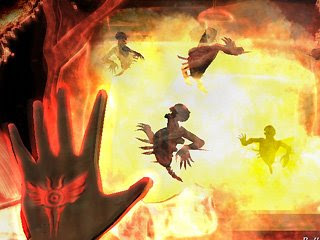 TOKYO--(BUSINESS WIRE)--NeuroSky, Inc., the leading manufacturer of “wearable” consumer bio-sensors, announced today the unveiling of a brainwave-controlled video game at the Tokyo Game Show 2008 in Makuhari, Japan, on October 9 and 10. This exciting and entertaining demonstration is based on a new game concept being jointly developed with Square Enix Co., Ltd. (Square Enix).

The technical demonstration developed with Square Enix operates in conjunction with Windows PC machines and features the NeuroSky commercial headset, MindSet™. The recently introduced MindSet is capable of interfacing to a variety of gaming platforms, including PC, console and mobile. It resembles a pair of headphones, with a single electrode contacting the user’s forehead while reading the player’s brainwave information, or EEG data. The headset registers the current state of relaxation or concentration of players, allowing them to perform a variety of actions within the game.

“At Square Enix, we are actively involved in developing a variety of gaming interfaces. I am thrilled to have this opportunity to work with NeuroSky, and apply their advanced sensor technology in this brain-wave controlled game demonstration,” commented Ryutaro Ichimura, Producer at Square Enix. “Although the main purpose of the demo is to test the results of our short development period, I hope it also unlocks new potentials in gaming.”

Stanley Yang, the CEO of NeuroSky, considers the joint development with Square Enix as further validation that brainwave-reading (EEG) technology is rapidly emerging onto the video game scene. “We are delighted to have built such an important partnership with a key industry player to have jointly developed a demonstration based on brainwave-reading technology. The market has been anticipating the introduction of this technology for many years, and the reality of controlling features of a video game through mental control is finally taking root.”

NeuroSky’s booth will be located in the Business Solution Area (3-N4). The technical demonstration will take place on Thursday, October 9th and Friday, October 10th only.

Founded in 2004 and headquartered in San Jose, CA, NeuroSky has developed cost-effective and “wearable” (dry) bio-sensor and signal processing technology specifically designed for end-use in the consumer market. NeuroSky’s products offer opportunities for its exclusive partners and developers to create next generation applications in markets as diverse as consumer electronics, health & wellness, education & training, transportation, market research and others. For more information about NeuroSky, please access www.NeuroSky.com

Square Enix Co., Ltd. (Square Enix), a wholly-owned subsidiary of Square Enix Holdings Co., Ltd., with headquarters in Tokyo, Japan, develops, publishes and distributes entertainment content including interactive entertainment software and publications in Asia. Square Enix brings two of Japan’s best-selling franchises - FINAL FANTASY®, which has sold over 85 million units worldwide, and DRAGON QUEST®, which has sold over 46 million units worldwide - under one roof. Square Enix is one of the most influential providers of digital entertainment content in the world and continues to push the boundaries of creativity and innovation. For more information about Square Enix, please access www.square-enix.com/jp/company/e.