40th anniversary of seeing the dark side of the moon 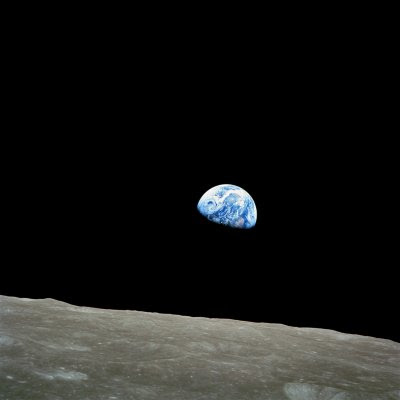 40th anniversary of seeing the dark side of the moon
By Matt Ford
December 24, 2008

Humans have been going into space ever since the Russian Aviation and Space Agency launched Yuri Gagarin into a single orbit about Earth on April 21, 1961 aboard Vostok 1. In the intervening 47 years, there have been 292 manned space flights; 182 by NASA, 105 by Russia, two by China, and three by private company Scaled Composites. Out of all of those missions, the majority—in fact a full 283—never really did anything more than go around the block, so to speak. Only nine manned missions have ever truly left Earth and entered the gravitational influence of any other celestial body.

The first time this happened was the Apollo 8 mission, during which Jim Lovell, Frank Borman, and William Anders put their Apollo command module into lunar orbit 40 years ago today, December 24th, 1968. 1968 is considered one of America's most tumultuous years in the 20th century. Beginning with the Tet offensive in Vietnam, which saw heavy American casualties, it was followed up by Rev. Martin Luther King's assassination in Memphis and ensuing riots across the nation, then saw Robert Kennedy get assassinated two months later. Finally, the battle between police and protesters in the streets of Chicago at the Democratic National Convention left a black mark on 1968. However, on December 21st, Apollo 8 launched three humans on the first-ever voyage to the moon.

The crew of Apollo 8 spent Christmas Eve orbiting the moon, becoming the first humans to ever see the dark side of the moon—due to the synchronous rotation, we only ever see the same lunar face from Earth—and the first ever people to witness the Earth rise. William Anders' famous photo was named one of the 100 photos of the century by Life magazine.

On their ninth of ten orbits of the moon, NASA did a live television broadcast from the crew in lunar orbit. During this broadcast, the crew read passages from the Book of Genesis, specifically the story of creation, and ended with Frank Borman's historic phrase, "And from the crew of Apollo 8, we close with good night, good luck, and a Merry Christmas to all of you, all of you on the good Earth." The mission ended safely with splash down in the pacific ocean, where the crew—now the first humans to ever travel to another heavenly body—was picked up by the aircraft carrier USS Yorktown. My father was serving on board that day as part of the honor guard when they picked the three up and welcomed them back to Earth.

Seven months later, on July 20th, Neil Armstrong and Buzz Aldrin would finally land on the moon, which became—at least in my opinion—one of the most important events in human history. It brought the entire world together, even if just for a moment. While the achievement of Apollo 11 gets the lion's share of the credit, it is important that the first time we truly left Earth not go unrecognized.