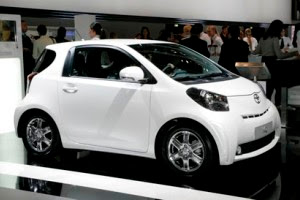 The Toyota iQ will radically change the way people look at city cars, or so says Toyota. Measuring less than 3 meters (that's less than 118 in. to we Americans), the Japanese giant is calling the iQ "the world's smallest premium 4-seater ever built." Truth be told, the iQ is not really a 4-seater, as the car is more suited to carrying three adults and a child, although there's no denying the car's innovative interior packaging considering its diminutive size.

The iQ promises to bring a whole new dimension of excitement to the city-car class, capable of exceeding speeds of 105 mph. Among the latest in active and passive safety features, is the world's first rear window curtain shield airbags.

Toyota says "a major milestone" in the company's continuous efforts to develop technologies that reduce emissions to much lower levels." There are currently no plans to bring the iQ to the U.S. 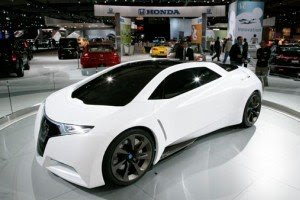 Honda FC Sport Concept
A look at what a future fuel cell-powered three-seat sports car may look like.
By Matt DeLorenzo

Designed to show that high performance and green concerns can go hand-in-hand, the Honda FC Sport Concept is a look at what a future fuel cell-powered 3-seat sports car would look like.

The FC Sport incorporates the same V Flow fuel-cell technology that Honda has developed for the limited-production FCX Clarity sedan. This new concept has a lightweight cab-forward body housing the fuel-cell propulsion system located between the rear two seats. The battery pack and electric motor — mounted low in the chassis ahead of the rear axle — give the car a low center of gravity and help ensure an ideal fore/aft weight distribution.

While the drivetrain is mounted low in the vehicle, the vehicle's hydrogen tanks are visible through the rear deck glass as a way to showcase the car's fuel-cell pedigree.

The driver sits in a racecar-like center position with the passengers flanking the driver to the rear. The car's sleek body sweeps rearward and tapers into a geometric hex form, which houses the fuel cell's coolers. At the front, Formula 1-style barge boards enhance high speed stability and provide a visual link to Honda's Grand Prix efforts.

Cabin ingress and egress is afforded through the rear-hinged canopy, which swings upward. In addition to maximizing the potential of the fuel-cell drivetrain, the FC Sport Concept is designed to employ green construction techniques that reduce its overall carbon footprint. For instance, the car's composite exterior panels are intended to use plant-derived bio-plastics.

Honda has no performance data for this concept, which is purely a design exercise at this point. 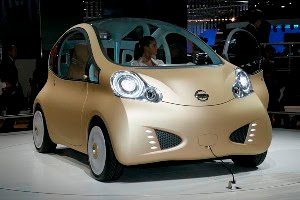 Nissan's Nuvu concept (think "New View") is Nissan's vision for the type of car we'll be driving in cities by the middle of next decade. Although it is an electric car, Nissan says the Nuvu is not the electric car the company recently announced it will sell in the U.S. and Japan in 2010. The Nuvu does carry some technology destined for the production vehicle.

As befitting a proper city car, the Nuvu is small: about a foot longer than a Smart Fortwo. A unique 2+1 seating arrangement allows for a third passenger when needed, or the seat can be folded down. Unlike many city cars, the Nuvu has enough luggage capacity for a proper supermarket run.

Of note, the Nuvu's roof has 12 small leaf-shaped solar panels, which charge the battery via a "tree-trunk" within the car. And to further emphasize the Nuvu's "green-ness," the cabin makes use of natural, organic and recycled materials.

"Nuvu is a concept car, for sure, but it is an entirely credible vehicle," says Francois Bancon, the general manager of Nissan's Exploratory and Advanced Planning Department.