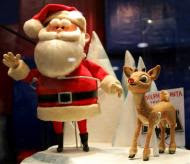 LUBBOCK, Texas (AP) — There may be a perfectly good reason why Santa doesn't get lost on his annual Christmas globetrot: His flying reindeer just might be female and don't mind stopping for directions.

The gender of Rudolph and his or her sleigh-hauling friends — the subject of goofy Internet chatter every year around this time — is now being pondered by renowned wildlife experts at Texas A&M University.

"Santa's reindeers were really females, most likely," said Alice Blue-McLendon, a veterinary medicine professor specializing in deer who cites the depictions of Santa's helpers with antlers as the primary evidence. It turns out reindeer grow antlers regardless of gender, and most bulls typically shed their fuzzy protrusions before Christmas.

But Santa's sleigh helpers might also be castrated males, known as steers, said Greg Finstad, who manages the Reindeer Research Program at the University of Alaska Fairbanks.

Young steers finish shedding their antlers in February and March, just as non-expecting females do. Bulls generally lose theirs before Christmas, while expectant mothers retain their antlers until calves are birthed in the spring. This allows them to protect food resources through harsh weather and to have enough for developing fetuses, he said.

Sledders most often use steers because they maintain their body condition throughout the winter, he said. Bulls are tuckered out from rutting season when they mate with as many as a dozen females in the months leading up to December. That leaves them depleted and too lean to pull a sleigh or sled through heavy snows, Finstad said.

Many females are pregnant after rutting season, which lasts from summer and into the fall. That would mean long hours of backbreaking work for an expecting Rudolph, as well as Donner, Blitzen, Cupid, Dasher, Dancer, Prancer, Comet and Vixen.

"You don't hook up your pregnant females to a sled," Finstad said. "That is not good animal husbandry."

But other aaspects of the Christmas story support the all-girl sleigh team theory, Blue-McLendon said.

For example, would a boy reindeer really sport a shiny red nose that almost glows?

"Females like accessories," said Blue-McLendon, who in 2003 led the school's cloning of a white-tailed deer. "I think that fits because females like bling. We like shiny stuff."

As for the reindeer games, forget the rough antler-smashing stuff. Blue-McLendon suggests a female Rudolph would be more up for "games of wit."

And as for the name, Rudolph could certainly still work.

"Why not?" Blue-McLendon said. "I know women named Charlie."

Email ThisBlogThis!Share to TwitterShare to FacebookShare to Pinterest
Labels: Christmas