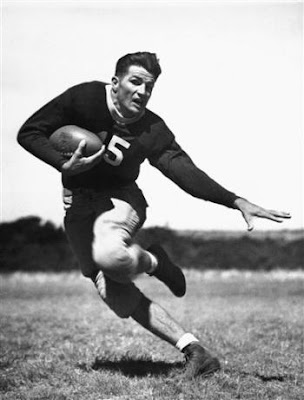 LUBBOCK, Texas (AP) — Slingin' Sammy Baugh, the ultimate three-way threat who revolutionized the use of the forward pass as a Hall of Fame quarterback for the Washington Redskins, died Wednesday night. He was 94.

Baugh, who had numerous health issues, died at Fisher County Hospital in Rotan, according to his son, David Baugh. He said his father had battled Alzheimer's disease and dementia for several years and recently had been ill with kidney problems, low blood pressure and double pneumonia.

"It wasn't the same Sam we all knew," his son told The Associated Press. "He just finally wore out."

Sammy Baugh was the last surviving member of the Pro Football Hall of Fame's inaugural class.

After starring at TCU, "Slingin' Sammy" played with the Redskins from 1937 to 1952, leading them to the NFL title in his rookie season and again in 1942.

Baugh was the best all-around player in an era when such versatility was essential. In 1943, he led the league in passing, punting and defensive interceptions. In one game, he threw four touchdown passes and intercepted four as well. He threw six touchdowns passes in a game twice. His 51.4-yard punting average in 1940 is still the NFL record.

"There's nobody any better than Sam Baugh was in pro football," Don Maynard, a fellow West Texas Hall of Famer who played for Baugh, said in a 2002 interview. "When I see somebody picking the greatest player around, to me, if they didn't go both ways, they don't really deserve to be nominated. I always ask, 'Well, how'd he do on defense? How was his punting?'"

When Baugh entered the NFL, the forward pass was so rare that it was unveiled mostly in desperate situations. But Baugh turn the pass into a regular feature of the offensive game plan.

As a rookie in 1937, he completed a record 81 passes (about seven a game) and led the league with 1,127 yards. By contrast, only six quarterbacks averaged three completions a game that year. He went on to lead the league in passing six times.

Baugh still holds Redskins records for career touchdown passes (187) and completion percentage in a season (70.3). His 31 interceptions on defense are third on the team's career list.

"He was amazing, just tremendously accurate," Eddie LeBaron, who took over as Washington's quarterback in Baugh's last season, said in a 2002 interview. "He could always find a way to throw it off balance. I've seen him throw the ball overarm, sidearm and underarm and complete them."

Baugh guided the Redskins to five title games and two championships, playing his entire career without a face mask. His No. 33 is the only jersey Washington has retired.

"Sammy Baugh embodied all we aspire to at the Washington Redskins," Redskins owner Dan Snyder said. "He was a competitor in everything he did and a winner. He was one of the greatest to ever play the game of football, and one of the greatest the Redskins ever had. My thoughts and prayers are with his family tonight."

Baugh's reputation blossomed as a star high school football, baseball and basketball player in Sweetwater. It began to grow during his college days at TCU.

It was there that he picked up the nickname "Slingin' Sammy" — but it wasn't for his passing. It was for the rockets he fired to first base as a shortstop and third baseman.

As an All-American football player, he led TCU to a 29-7-3 mark, including Sugar Bowl and Cotton Bowl victories. He masterfully executed an early ancestor of the West Coast offense at TCU, and he credits Horned Frogs coach Dutch Meyer with his NFL success.

"Sam Baugh will always remain an integral part of TCU," athletic director Danny Morrison said in a statement. "His accomplishments have left an undeniable impact on our football program and the sport in general. TCU is extremely fortunate and honored to call Sam Baugh one of its own."

After the Redskins' 73-0 loss to the Chicago Bears in the 1940 championship, a writer asked if the outcome would have been different had an end not dropped an early touchdown pass.

Baugh was known for his reclusiveness.

After his NFL career, Baugh retreated to his 7,600-acre West Texas ranch about 95 miles southeast of Lubbock. The Hall of Fame and the Redskins have tried to lure him east for ceremonies over the years, and he always turned them down.

For years he drove to Snyder three or four times a week for golf, until sore knees, searing heat and the 100-mile round trip made those outings too tough.

But he always enjoyed football season.

"I'll watch it all damn day long," Baugh, who often sprinkled his conversation with mild obscenities, told The Associated Press in a 2002 interview. "I like the football they play. They got bigger boys, and they've also got these damn speed merchants that we didn't have in those days. I'd love to be quarterback this day and time."

"He's great, but he doesn't punt and he doesn't play safety on defense," David Baugh said. "In that regard, Sammy was pretty darned great."

Sammy Baugh bought the Double Mountain Ranch, named for two hills that jut out of the flat earth north of his house, in 1941. He and his wife, Edmonia, who died in 1990, raised five children on the arid expanse covered with mesquite trees, prickly pear cactus and about 500 cows.

He came to the ranch full time in the mid-1960s, after several two years coaching the New York Titans and a year with the Houston Oilers.

In addition to his son David, Baugh is survived by sons Todd Baugh, of Billings, Mont., and Stephen Baugh, of Midland; daughter Frances Baugh, of Lubbock; sister Nell Kindrick, of Garland; 12 grandchildren and 11 great-grandchildren.