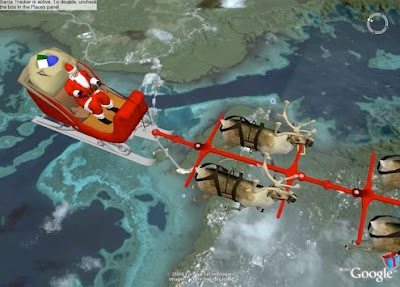 The military personnel charged with being the eyes in the sky are certainly acting like he does — and they've been joined on the Internet by millions of believers.

Even doubters have reason to pause when they hear the North American Aerospace Defense Command — or NORAD, which monitors air and space threats against the U.S. and Canada — is in charge of the annual Christmas mission to keep children informed of Santa's worldwide journey to their homes.

"They challenge it, but only to a point," said Senior Master Sgt. Sharon Ryder-Platts, 49, who for five years has been a Santa tracker, taking calls from those wanting to know the location of jolly old St. Nick.

According to NORAD, Santa began his latest flight early Wednesday at the International Date Line in the Pacific Ocean. Historically, Santa visits the South Pacific first, then New Zealand and Australia. NORAD points out that only Santa knows his route.

Last year, NORAD's Santa tracking center answered 94,000 calls and responded to 10,000 e-mails. About 10.6 million visitors went to the Web site, which can be viewed in English, Spanish, French, Italian, German, Japanese and Chinese.

NORAD's holiday tradition can by traced to 1955, when a Colorado Springs newspaper printed a Sears, Roebuck & Co. ad telling children of a phone number to talk to Santa. The number was one digit off, and the first child to get through reached the Continental Air Defense Command, NORAD's predecessor.

Shoup's daughter, Terri Van Keuren, said her dad, now 91, was surprised to hear that the little voice on the other end thought he was Santa.

Shoup, described by his daughter as "just a nut about Christmas," didn't want to break the boy's heart, so he sounded a booming "Ho, ho, ho!" and pretended to be Santa Claus.

Enough calls followed that Shoup assigned an officer to answer them while the problem was fixed. But Shoup and the staff he was directing to "locate" Santa on radar ended up embracing the idea. NORAD picked up the tradition when it was formed 50 years ago.

"If we didn't do it, truly I don't know who else would track Santa," Maj. Stacia Reddish said.

The task that began with no computers and only a 60-by-80-foot glass map of North America now includes two big screens on a wall showing the world and information on each country Santa Claus visits. It took off with the Web site's 1997 launch, Reddish said.

Now, curious youngsters can follow Santa's path online with a Google two-dimensional map or in 3D using Google Earth, where he can be seen flying through different landscapes in his sleigh.

NORAD officials are hesitant to list all the potential sites Santa will visit with certainty.

"Historically, Santa has loved the Great Wall of China. He loves the (Space) Needle in Seattle. He of course loves the Eiffel Tower," Reddish said. "But his path is completely unpredictable, so we won't know."

Ryder-Platts, 49, who has a 17-year-old son, said taking calls from children helps her keep her Christmas spirit.

"For someone like myself, my son is older, you know it just keeps you in touch with the spirit of Santa Claus," she said. "I miss out on that at home so this keeps me close to Santa. I believe! It keeps me in touch with other believers."
Posted by Robalini at Sunday, December 28, 2008