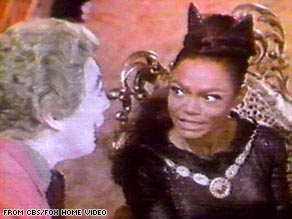 Story Highlights
Kitt died in New York, where she was being treated for colon cancer
Her daughter, Kitt Shapiro, was by her side
Her recording of saucy Christmas song "Santa Baby" was certified gold last week
Kitt made a name for herself in as Catwoman in "Batman" TV series

Kitt, 81, died in New York, where she was being treated for colon cancer, Freedman said. Her daughter, Kitt Shapiro, was by her side.

She was performing almost until the end, taping a PBS special six weeks ago in Chicago, Illinois. The show is set to air in February.

Kitt was well known for her distinctive voice and made a name for herself in her portrayal of Catwoman in the television series "Batman." That role produced Kitt's recognizable sultry cat growl.

She worked in film, theater, cabaret, music and on television during her lengthy career. According to Kitt's official Web site, she was nominated for a Tony three times, a Grammy and Emmy twice.

According to the biography on that site, Kitt lived in Connecticut near her daughter and four grandchildren.

Kitt was ostracized at an early age because of her mixed-race heritage, the biography says. At age 8, she was sent from the cotton fields of South Carolina by her mother to live with her aunt in New York City's Harlem neighborhood, the site said.

As a teen, she auditioned for the famed Katherine Dunham Dance Troupe, was hired as a featured dancer and vocalist, and toured worldwide with the company.

This launched Kitt into a life of roles in the entertainment field.

According to the book "Contemporary Black Biography," she was adored in Europe in the 1950s as a cabaret singer.

In the United States, her dance career led to a critically acclaimed stint on Broadway, including the play "New Faces of 1952," which was later made into a movie.

Broadway stardom landed Kitt a recording deal that led to a string of best-selling records, including "Love for Sale," "I Want to Be Evil," "Santa Baby" and "Folk Tales of the Tribes of Africa." She recorded more than 20 albums, worked in hundreds of television and movie roles, and was invited as a guest to the White House several times.
Posted by Robalini at Sunday, December 28, 2008

Eartha Kitt was and continues to be a legend... and it was so funny to find out that she starred in The Emperor's New Groove