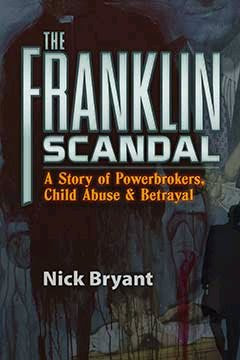 Any questions at all, please contact us atpublisher@trineday.net
*
“They” Don’t Burn Books Today, They Just Ignore Them…

We need your help to bust through the mainstream media blockade.

Many before us have tried to break the news about the Franklin Scandal, a terrible tale, the subject of an “underground” best-seller, and a television documentary that was yanked just before it was to air. The Franklin Scandal is all over the Internet, yet mainstream media will not touch the story. The worst is that innocent children were being devastated and nothing has been done.

Almost seven years ago, when assigned to do something “dark” for a major New York magazine, journalist Nick Bryant stumbled across the Franklin Scandal, wrote an article and, well … nobody would print it, and we mean nobody. All had a chance, but no one would: Harpers, Vanity Fair, The New Yorker, Mother Jones, Rolling Stone, and others. Nick, a successful and respected free-lance writer, represented by William Morris Agency, could not find any publishing house that would support this probe.

Any real official inquiry halted in 1990 with an exploding plane that killed investigator Gary Caradori and his 9-year-old son, A.J. Since then several people of means have arisen and taken up the cause of justice, only to have — every time — their finances come under attack, causing them to withdraw.

Nearly three years ago, Nick joined forces with TrineDay to complete his investigation. We are in the homestretch, and the book is coming out in March 2009. Now, all we have before us is what no one else has been able to do: break the real story in the mainstream media, have an honest discussion, a true official investigation, some justice for the victims and consequences for the perpetrators.

TrineDay has been told over and over by the “big boys” that because we do not have the funds to do a print run of 20,000 units and spend at least $20,000 on promotion, our books aren’t “real” books. We have also been told that unless our title is in hardcover, there are those who do not consider it a real book, and it is not worthy of their review or even notice — no matter what it reveals.

We have brought too many amazing scandals to print, only to see the mainstream media bury them, by simply behaving as if our book and the uncovered corruption do not exist. For this very important exposé, TrineDay is asking for your help to jump through “their” hoops, land on our feet and say, OK, let’s talk! To do this TrineDay needs to pre-sell just 3,000 copies. This is not a large number, over time we sell between ten and thirty thousand copies of a strong title. This can be done!

With your help (less than $30, and you do get a great book in March) all of us together can create change. A different, from-the-ground-up approach, instead of the current top-down model, where those with the most money dictate our public discourse and civic focus.

If this works for us, it can work for others and, maybe, we the people can garner voices that will cut through the mainstream media maelstrom.

I am the son of a recalcitrant CIA officer, who quit in 1959 because of his awareness of illegal goings-on. In 1969 he began to tell me things I didn’t understand. This led to years of research that confirmed what my Dad had told me. Then, when no one would publish a friend’s book about CIA misdeeds, I helped him, and in 2002 started TrineDay on a shoestring. TrineDay has since published over 20 suppressed works, and with your help, we’ll make some big noise with this one!
Posted by Robalini at Monday, December 22, 2008

Email ThisBlogThis!Share to TwitterShare to FacebookShare to Pinterest
Labels: CIA

My brother Rod Hotham was murdered in 1992 because he stepped into this mess. We all need to do what we can to support this book and see that this information gets out. This is the crux of the matter of what is going wrong in our country. The importance of this work cannot be overstated.