A moment with Mickey Rourke, back in the ring 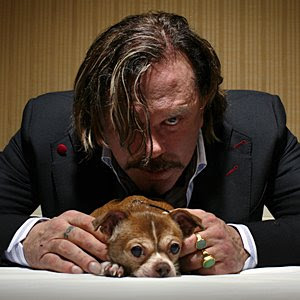 A moment with Mickey Rourke, back in the ring
Long written off as a has-been, the actor has managed a comeback that's against all odds.
By Mark Olsen
December 17, 2008

The eyes are the same. Say what you will about Mickey Rourke's face -- ravaged by time, battered by boxing and altered by who knows what else -- but his eyes haven't changed. They still have the live-wire flash, moving from cocky charm to wounded pride to raw pain in an instant. Watching those eyes brings to mind the Mickey Rourke who once was, the guy from "Diner" and "The Pope of Greenwich Village" and "Year of the Dragon," the Brando of the early '80s.

In "The Wrestler," which opens today, Rourke makes what is likely his last best go at regaining the respect and acclaim he walked away from to pursue a boxing career, a last shot at a comeback after years of self-destructive behavior and forgettable movies. Rourke's role as a once top-billed professional wrestler now struggling even for gigs in high school gymnasiums and grappling with age, injuries and personal demons was tailored specifically to the actor.

"People have asked me for a long time, what's the best movie you ever made?" Rourke says during a recent interview in Los Angeles. "And I'd say, 'I haven't made it yet.' Somebody asks me now, I say, 'The Wrestler.' "

Director Darren Aronofsky, himself making a comeback of sorts following the tortured "The Fountain," conceived the role for Rourke, even though the two had never met. Perhaps mutually wary of the other's reputation, their first meeting involved a few ground rules.

"We met at a restaurant for lunch and he told me how I'd screwed up my career for 15 years," Rourke says, "and I agreed with him. He said he had a project he'd like to do with me but he couldn't raise any money because of the state of my career. He said, 'If I work with you, you have to do everything I say and you can never disrespect me on the set. And I can't pay you.' And I thought, 'And he's got [guts] too. This is my kind of guy.'

"And I could see, and this scared me a little, I knew he knew the kind of actor I am, and I also knew from when I read the material, this guy's going to want me to visit some really dark, painful places. Then he asked me if I knew anything about gigging, when the wrestlers would take a razor blade and cut themselves. He said, 'I'm gonna want your blood.' "

Following months of weight training and learning the ins-and-outs of wrestling, Rourke had added an extra 46 pounds of muscle to his already imposing frame in preparation for the part of Randy "The Ram" Robinson. Once filming started, Aronofsky lived up to his promises, pushing Rourke on-set during the shoot.

Aronofsky allowed Rourke to rewrite much of his dialogue, revising it to match his own emotions and experiences. When Randy the Ram delivers a touchingly sincere speech to the crowd -- about how much their support and being a player in the wrestling ring has meant to him -- before the film's climactic match, Rourke says the words express his own feelings toward Hollywood.

The onetime bad boy actor known for being difficult on set and his taste for hard and lavish living has spent years in therapy while staying in cheap apartments, coming to terms with his personal and professional failures. The triumph of his turn in "The Wrestler" is made all the better by acknowledging just how far he had fallen.

"Look, I had a career and I threw it away," says Rourke, whose past includes an arrest on spousal abuse charges, which were later dropped, and a DUI. "I wasn't accountable for anything and I didn't take responsibility. I was unprofessional. There were things I blamed on the system or other people but it was Mickey Rourke who screwed everything up, not Hollywood or any director or producer.

"Not until I lost everything in my life that meant anything to me that I loved or cared about, could I look in the mirror and go, 'It's you.' When you're finally able to do that, you're in a lonely, dark place, because only you can get you out of that."

This isn't Rourke's first take at a comeback. He's slowly been making his way back for years. There were small roles in films made by friends, scene-stealing turns in Sean Penn's "The Pledge" and "The Rainmaker" for Francis Ford Coppola (who earlier directed Rourke in one of his most iconic roles in "Rumble Fish"). Then Rourke landed supporting parts for Tony Scott in "Man on Fire" and "Domino," alongside appearances in Robert Rodriguez's "Once Upon a Time in Mexico" and "Sin City." That role in "Sin City," in particular, as a brokenhearted enforcer named Marv, brought Rourke a new level of exposure and acclaim, in some ways setting the stage for his full return in "The Wrestler."

"I didn't think it was going to take so many years, like 13, 14 years, to come back," Rourke says. "I thought I could change. And change is hard. But I have changed, I am accountable now, I take responsibility and know there are repercussions. I need to think twice before I misbehave or do something foolish.

"I'm always gonna have that little [devil] with the hatchet in me ready to go, and I've got to keep the little [devil] quiet. This is my last chance, I ain't getting no more chances. This is it for me."

Olsen is a freelance writer.