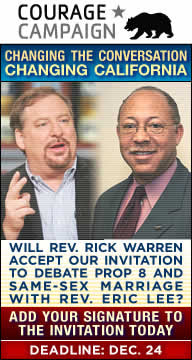 When Pastor Rick Warren was asked to clarify this statement -- if he actually equates same-sex marriage with incest, pedophilia and polygamy -- his answer was direct and unequivocal: "Oh, I do."

That didn't stop President-elect Barack Obama from choosing Pastor Warren to give the invocation at his inauguration -- an appalling mistake that will forever tarnish our country's celebration of Obama's historic ascendance to the White House.

While President-elect Obama has chosen to ignore the troubling beliefs of the man who will spiritually usher in his presidency, Californians can not ignore Rick Warren and his Saddleback Church followers, based in Orange County.

We can not ignore Rick Warren's fervent support for Proposition 8 or his mobilization of thousands of evangelical Christians to enshrine discrimination into our state constitution.

Harvey Milk did not ignore John Briggs in 1978, when Briggs sought to pass Proposition 6 -- the infamous "Briggs Initiative" that attempted to ban gay and lesbian teachers, and anyone who supported them, from our California's public schools. Milk challenged Briggs to debates across the state.

And we're not going to ignore Rick Warren. That's why we're asking you to give Pastor Warren a new invitation -- a Courage Campaign invitation to a public debate on same-sex marriage with Reverend Eric Lee, President of the Southern Christian Leadership Conference (SCLC) of Greater Los Angeles.

It's time to challenge Rick Warren to an open, honest debate about same-sex marriage. Click here now to join us, by signing your name to our invitation to Rev. Warren to debate Rev. Eric Lee. On December 24, the Courage Campaign will deliver your signatures to Pastor Warren at the Saddleback Church in Orange County:

You may not know Rev. Eric Lee. But you should.

Rev. Eric Lee is a courageous leader on marriage equality in the faith community and in the African American community. Representing the SCLC, founded by the Rev. Martin Luther King, Jr., Rev. Lee expressed his strong opposition to Prop 8 in October by taking a stand with the Courage Campaign against the Mormon Church's heavy involvement in the Prop 8 campaign.

Now, Rev. Lee is taking a stand again, challenging Pastor Warren to a debate about Prop 8 and same-sex marriage.

Rev. Eric Lee needs your support to challenge Rev. Rick Warren to debate Prop 8 and explain Warren's comparison of same-sex marriage to incest, pedophilia and polygamy. Please sign here -- and ask your friends to gather as many signatures as possible -- before December 24:

Thank you for everything you are doing to restore marriage equality and push for progressive change in California.

P.S. To repeal Prop 8, and change California forever, we need to change the conversation.

You can change the conversation by signing this invitation to Rick Warren and forwarding this message to your friends today. The more signatures we gather, the more likely Rick Warren's views on same-sex marriage will be challenged, this time by another man of faith. DEADLINE: DECEMBER 24:

Courage Campaign Issues is part of the Courage Campaign's online organizing network that empowers over 300,000 grassroots and netroots activists to push for progressive change in California.

To power our campaign to repeal Prop 8, please contribute today.
Posted by Robalini at Friday, December 26, 2008