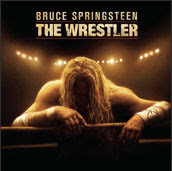 The Wrestler, a new film starring Mickey Rourke and directed by Darren Aronofsky, is now showing in select theaters in New York and Los Angeles (and opens everywhere else soon).

The title song, heard in the trailer, is a brand new Bruce Springsteen track! It's available on iTunes now!

"I wrote Bruce a letter, because we've known each other over twenty years, and he knows what I used to be, or whatever. Where I went. What I'd been reduced to. I told him how I felt lucky now and didn't have to end up being this guy, being Randy (character from The Wrestler). A while later, I got a call in the middle of the night: he said he'd written a little song, for nothing. It's fucking beautiful, right? I was honoured he took the time, because he's a busy cat. I mean, I'm so goddamn proud of this magical movie and to have Bruce's input… ain't nobody in Hollywood with all their millions can just ring the man and he'll do a song, y'know?"
— Mickey Rourke
Posted by Robalini at Monday, December 22, 2008