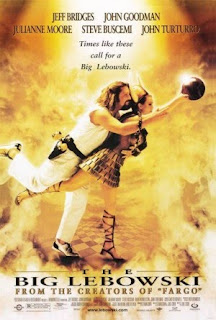 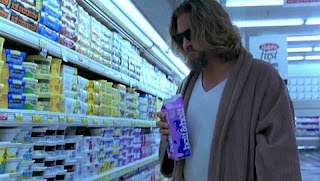 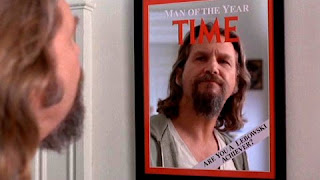 When searching for the definition of a cult film, a number of possibilities identify themselves:

A film that fails on every level, yet is enjoyable for that very reason? Even Super Mario Bros. and Batman & Robin have their fans.

A film that is messy and uneven, but has enough good ideas and/or charm to make it almost work? Look at Dune or Southland Tales.

How about a film that passes people by first time round and is discovered by fans due to positive word-of-mouth rather than studio promotion? That's a bingo. Donnie Darko, Office Space, True Romance, I could go on. In fact, I will. Because in the last ten years or so one cult figure has stood above all others and they call him The Dude.

It takes a special character to hit with an audience the way Jeffrey "The Dude" Lebowski has. A man who seems to have an ideal stress-free lifestyle only to have it interrupted by mistaken identity and a labyrinthine set of circumstances that, to try and understand, is to miss the point entirely.

In many works of fiction we are supposed to believe that our protagonist is ill-suited to being a hero before we see his/her transformation into exactly that. They will always learn to believe in themselves or fathom even the most impossible of circumstances to emerge as the person we all wish we could be.

Not here. That would very un-Dude. 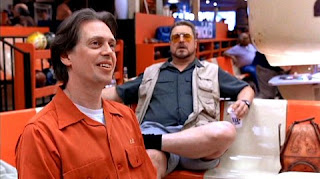 Our man learns nothing. He ends the story just as he began: drinking, bowling, doing as little as possible. The Dude abides, and we love him all the more for it. He is the personification of the film itself. If you understand him, you'll know what's going on elsewhere. If not, you're buggered.

Writer, editor, producer, director team Joel and Ethan Coen were already renowned for their characterisations of idiots and losers and a common theme in their, frankly, extraordinary body of work is that, despite appearances, nobody really knows anything.

Take the opening sequence of The Big Lebowski. We open at night on a dusty desert landscape as a lone tumbleweed blows in the breeze and Sam Elliott's Texas-accented narrator begins his preamble.

We could be forgiven for thinking we're watching a western until the camera tracks over a canyon to reveal modern day (well, early 90s) Los Angeles (a reference to Once Upon A Time In The West, I reckon).

Nevertheless, our narrator continues unabated by the present day setting and the tumbleweed drifts through the city until we meet The Dude, wandering shabbily through a supermarket in his dressing gown and paying for a carton of milk by cheque (we never learn source of his income), refusing to move with the times.

At this point our narrator drifts off on a tangent and admits that he's lost his train of thought. Then minutes later, The Dude and partner-in-crime Walter refuse to interrupt their strict bowling routine to solve the mystery of Bunny Lebowski's kidnapping ("Fuck it, Dude. Let's go bowling."). They don't care about the plot. They don't want to know what's happened to her. They want to bowl. And how can we blame them? We wouldn't let it upset league play either.

Even when the mystery is solved (well, sort of) it fades into inconsequence as the death of Walter and The Dude's friend, Donnie, obscures everything else that has come before it. His death shows us that, if properly written, there are no pointless characters even if their involvement seems to be so. 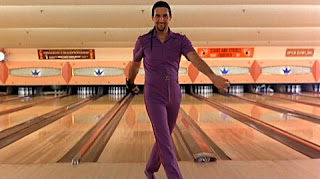 The aftershock of his unexpected passing is played for laughs, but is laced with such tenderness that it is incredibly touching, and repeated viewings make you fall in love with him all the more for knowing his fate.

Speaking of seemingly pointless characters, why is John Turturro's Jesus Quintana even in the film? What bearing does he have on the plot (beyond stealing both of his scenes)? Nothing whatsoever.

Like Donnie, he's important to us because he's important to The Dude and Walter. He's their next opponent in the bowling tournament. Who are we to tell them that Jackie Treehorn or the Nihilists or the other Jeffrey Lebowski should be their archrival?

Like the tumbleweed and the rambling narrator and The Dude himself, The Big Lebowski has no agenda. Its existence seems to be for nothing more than having fun and meeting a bunch of cool people that we like hanging out with. Isn't that what life is about, anyway? Couldn't we all learn a little something from The Dude?

Some of his fans clearly think so. Lebowski Fest is eight years old this year and has been held in various venues across America with a similar event, The Dude Abides, being held in London. How about Dudeism, the religion based on the teachings of El Duderino himself? How many other films have inspired their own religion? (Battlefield: Earth doesn't count).

It seems that despite boasting the tightest ramshackle plot in the history of film and taking the risk of being completely unique, this box office flop has done what the likes of The Da Vinci Code, 2012 and The Phantom Menace could never even dream of: it has become a legend.

It is the film that the weird beardy guy at uni talks about while he pours vodka in his milk. It's the film that the girl with the designer holes in her jeans and faux-faded t-shirt pretends she's seen. It has spoken to people on a level that they themselves don't understand and has found an audience despite being misunderstood and mishandled on initial release.

And that, friends, is the definition of a cult film. So, if you haven't met him before, or if you have and want to see him again...lost my train of thought there. Ah, hell I've done introduced him enough... 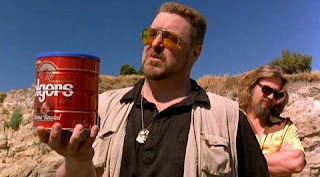 Email ThisBlogThis!Share to TwitterShare to FacebookShare to Pinterest
Labels: The Big Lebowski, The Dude

Howdy would you mind sharing which blog platform you're using? I'm going to start my own
blog soon but I'm having a difficult time making a decision between BlogEngine/Wordpress/B2evolution and Drupal. The reason I ask is because your layout seems different then most blogs and I'm looking for something completely unique.

P.S Sorry for getting off-topic but I had to ask!

If you desire to improve your familiarity simply keep visiting this site and be updated with the latest
news posted here.

Every weekend i used to pay a quick visit this site, because i wish
for enjoyment, as this this website conations in fact nice funny data too.

Pretty section of content. I just stumbled upon your blog and in accession capital to assert that I acquire in fact enjoyed account your blog posts.
Anyway I'll be subscribing to your feeds and even I achievement you access consistently fast.

Wow that was odd. I just wrote an extremely long comment but after I clicked submit my
comment didn't appear. Grrrr... well I'm not writing all that over again.

Feel free to surf to my page :: glutenfreies Rezept

That was an exceptional browse! Thanks for that. I hope
you have a large amount of accomplishment with your blog.
I will not necessarily mean to self promote but this is an fantastic bodyweight decline
product.
Carb Blocker