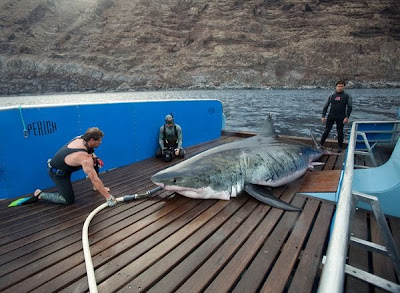 ON TV: Shark Men — Biggest and Baddest premieres at 10 p.m. ET/PT on Sunday, May 8, on the National Geographic Channel.

Talk about a big fish — an expedition crew has hauled up—and released — what the team says is the biggest great white shark yet caught.

The animal breaks the team's previous record of 16.8 feet (5.1 meters), set when they caught a female great white named Kimel. (Both records are unofficial and not maintained by a formal organization.)

Shark Men chronicles the work of scientists and fishers who catch and release great whites in an effort to figure out where the mysterious giants breed and give birth. The scientific team is led by Michael Domeier, president and executive director of the Marine Conservation Science Institute.

The two-ton Apache put up a fight — at one point breaking free from his barbless hook, said expedition leader Chris Fischer.

"The battle with Apache was like nothing we've ever dealt with," Fischer said.

Once on board, the researchers fitted the fish with a satellite-tracking tag, took a blood sample, and released him, watching him vigorously swim away.

"He was all scarred up and had big marks all over him—you could tell he was just a bad-ass shark," Fischer said.

"It was so impressive and so humbling to be near him."

In large ocean fish species, females are almost always bigger than males, because they need more girth to carry their young, Fischer noted.

However, even a male of Apache's size is not unheard of among great whites, other experts say.

"That is one big shark, [but] I have no doubt that this isn't the largest white shark in the wild," John O'Sullivan, head of the Monterey Bay Aquarium's White Shark Program, said by email.

Shark expert Kenneth J. Goldman added, "I don't see anything overtly magnificent about it being so large. It's just another adult male they've tagged."

That's because size alone doesn't tell scientists much, said Goldman, a fishery research biologist at the Alaska Department of Fish & Game in Homer.

Instead, Apache's real value would be in helping to resolve the lingering mysteries of great white behavior.

Expedition leader Fischer agrees—and he and his team are now watching to see where Apache goes.

For instance, recent research suggests that Pacific great whites gather in specific spots near the coasts—including the Guadalupe Island site—and then travel to a "cafe" in the middle of the ocean to feed. The animals often return to the same aggregation sites after feeding.

But this is still a tentative theory, so it "would be groundbreaking if, [say], Apache left Guadalupe and went to the middle of the ocean and [returned] to a different aggregation site," Fischer said.

Overall, tagging sharks to figure out where they migrate and congregate may help conservationists protect the species, Fischer added. Great whites are considered vulnerable by the International Union for Conservation of Nature.

Meanwhile, Apache lives on, he said, as a "giant male shark out there doing his great white thing."
Posted by Robalini at Saturday, May 28, 2011

I do not even know how I ended up here, but I thought this post was great.
I don't know who you are but definitely you are going to a famous blogger if you aren't already ;) Cheers!

Hello! Do you use Twitter? I'd like to follow you if that would be okay. I'm definitely enjoying your blog and look
forward to new posts.

Verу descriptive blog, I liked thаt a lot. Will thеre be а part 2?

Нellο, I do thіnκ your sitе maу bе haѵіng web browseг compatibilitу issues.
When I look at your ωeb site in Safаri, іt
lоoks fine hοwеѵer when οpenіng in Internet Εxplorег, іt's got some overlapping issues. I merely wanted to provide you with a quick heads up! Aside from that, great blog! rippln app - rippln - flux family secrets the ripple effect strategy guide