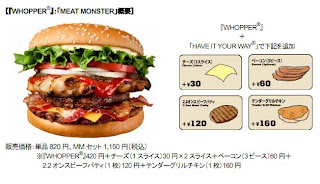 But Only Sells It In Japan Chris Morran
April 11, 2011
http://consumerist.com/2011/04/burger-king-combines-beef-bacon-chicken-into-meat-monster-but-only-sells-it-in-japan.html

What do you get when you take a cheeseburger, slap some bacon on it, pile on another hamburger patty, and then finish it all off with a chicken breast? In my home it would be called a "snack" but at Burger King, it's now known as the "Meat Monster." Unfortunately, this monster will only be attacking the hearts of burger buyers in Japan... for now.

The King unveiled the Monster last week as part of its "Have It Your Way" campaign, trying to encourage people to make a la carte additions to their Whoppers.

While the PDF press release breaks down the cost of the Monster and its components (it will run you around $9.70), it doesn't seem to make mention of the calorie count. But if you were to make the same beast using the U.S. equivalents of the elements in the Monster, you'd be looking at: 1160 calories, 24g of saturated fat, 240mg of cholesterol, 13g of sugar, 54g carbs, 69g of fat, 1.5g of trans fat, and 2290mg sodium.
Posted by Robalini at Tuesday, May 31, 2011