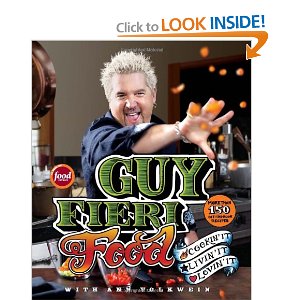 The idea behind creating Guy Fieri Food was to pull together the stories and recipes that show how I got to where I am today. I’ve put everything into this book as if it was the last thing I will ever do. That’s a huge position to take, and everyone who participated, from family to friends to supporting teams, had the same attitude from beginning to end. It was Go Big or Go Home.

With my Guy Fieri Knuckle Sandwich team, I developed recipes for the book by brainstorming on camping trips, on airplanes, through texts, over voicemails, on cocktail napkins, and by stepping into somebody’s kitchen while on the road. Every moment, all the time, the recipe machine was on. I can’t taste it, look at it, see it, smell it, want it, or be around it without thinking what more it could be, where it could be used and how it could be served. Creating new recipes is like playing on a giant culinary playground—as long as you bring a fearless attitude you’re in the game.

I say it on Triple D all the time— everything has a “kicker.” It’s what it takes to make the dish outta bounds. The kicker here is chili and cayenne. . . . Ooooh yeahhhhhh!

3. While the pizza crust is baking, toast the almonds in a dry medium skillet over medium- high heat. Transfer the almonds to a plate to cool.

4. Melt the butter in the skillet. Add the graham cracker crumbs, chili powder, cayenne, and salt. Cook for 2 to 3 minutes, until the crumbs are well- coated. Remove from the heat and set aside.

If you've checked out my Diners, Drive-ins and Dives books or visited my restaurants, Johnny Garlic's and Tex Wasabi's, you know I'm down with all types of good food—and that I'll do what's required to track it down. In Guy Fieri Food, I'm cookin' it my way, from the perfect recipe for Pepper Jack Pretzels (from Mr. Awesome Pretzel himself—that's me) to how to pull together a Red Rocker Margarita Chicken sandwich to a full-on vegetable Guy'd (bet you didn't see that one comin'!). Before I'm finished I'll have you throwing parties with everything from Bacon-Jalapeno Duck appe-tapas to Chicago Beef Pizza to Johnny Garlic's Cedar Plank Salmon.

Fact is, I've been cookin' it, livin' it, and lovin' it since I was just a kid, and it's a privilege to help you bring home some of my own classic, big, and bold flavors.

In 2006, Guy Fieri premiered his first show, Guy's Big Bite, on Food Network after winning season two of The Next Food Network Star. Today, this “culinary rock star” hosts two additional top-rated shows on the network: Diners, Drive-Ins and Dives and Tailgate Warriors. And on March 14, 2010, Guy made his debut as a game show host on the NBC prime­time series Minute to Win It.

In 2011, Guy officially launched CWK (Cooking with Kids;), a program that encourages developing healthy eating habits to address the childhood obesity crisis, strengthen the family unit by sharing quality time in the kitchen, and as a result increase our children's self-esteem in a fun and positive way.

Email ThisBlogThis!Share to TwitterShare to FacebookShare to Pinterest
Labels: Food