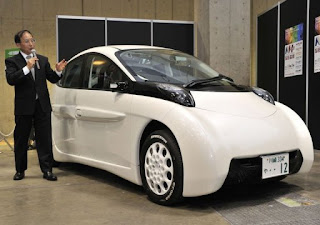 TOKYO — Japanese developers have unveiled an electric car they said Wednesday can travel more than 300 kilometres before its battery runs flat.

Electric vehicle specialist SIM-Drive, which hopes to take the car to market by 2013 but gave no projected cost, said its four-seater "SIM-LEI" had motors inside each wheel and a super-light frame, allowing for 333 kilometres (207 miles) of motoring on one charge in a test.

Its designers say they hope the prototype, a joint project among 34 organisations including Mitsubishi Motors and engineering firm IHI, will be sold to car manufacturers for mass production.

Automakers such as Nissan, which launched its all-electric Leaf last year with a 160-kilometre range, are gambling that electric cars with zero tailpipe emissions will catch on and, some time in the future, start to drive traditional petrol-guzzlers off the road.

Electric cars still face key hurdles such as costly batteries and the lack of conveniently-located recharging points, which limits their operating radius.
Posted by Robalini at Tuesday, May 31, 2011

I admire Japanese developers!! They have amazing inventions!

It's actually a great and helpful piece of information. I'm glad that you just shared this helpful information with us.