The Rise and Fall of a Scientific Genius 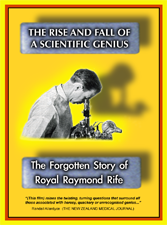 See the staggering discoveries and work of Roy Rife which led him to a cure for cancer (among many other diseases) in 1934.

Hear Rife's own voice describe his breakthroughs and successes which shook the medical-pharmaceutical establishment to its core.

This all new, completely re-edited DVD version of the original two-part film by Shawn Montgomery, will leave you reeling with anger and shock at what has been withheld from all of us by men with an unbridled lust for profits and a complete disregard for the welfare of humanity.

"The Rise and Fall" shows how Rife's own brilliance led him to eventual ruin in the hands of the hopelessly corrupt American Medical Association, which did not and still does not want you to know his astonishing story. Countless millions of lives have been lost due to conflicting interests within the so-called Cancer Industry.
Posted by Robalini at Tuesday, May 31, 2011

Email ThisBlogThis!Share to TwitterShare to FacebookShare to Pinterest
Labels: Cancer