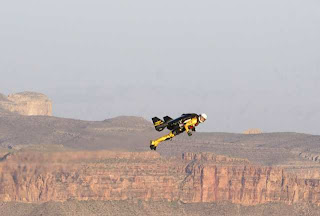 Yves "Jetman" Rossy has experienced a Grand Canyon tour as only someone who calls himself Jetman can: with a rocket-powered winged suit fastened to his back -- at speeds up to 190 mph.

The Swiss adventurer, who had already flown his "jet wing" over the Alps and across the English Channel, had intended to make his Grand Canyon thrill ride -- his first-ever U.S. flight -- Friday before a large media gathering. He postponed that excursion, though, because of delays in obtaining permission from the FAA.

Rossy explained to the Swissinfo news site that after the FAA gave its approval Friday, it was too late because he had not had time to practice and had become nervous in front of the large crowd. "This is a very challenging place," he said. "Big air currents, steep walls. Without training I don't want to take the risk of presenting something unprofessional."

Instead he made the eight-minute flight Saturday, after the FAA had granted him permission, before a small number of witnesses and his support team, which recorded the video and revealed the details Tuesday.

Rossy, an airline pilot who in 2004 became the first person to fly a jet-powered wing, launched from a helicopter 8,000 feet above the canyon floor and soared like Superman amid the canyon splendor. After the flight he deployed his parachute and floated like a giant black-and-yellow moth to sweet earth.

"My first flight in the U.S. is sure to be one of the most memorable experiences in my life," he said in a news release. "Not only for the sheer beauty of the Grand Canyon but the honor to fly in sacred Native American lands. Thank you Mother Nature and the Hualapai Tribe for making my lifelong dreams come true."