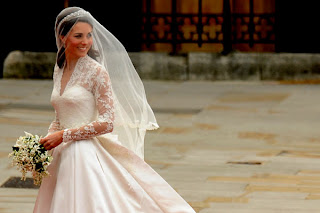 Pics of Princess Kate at her royal wedding revealed her pleasingly tight body to the masses, and may inspire popularity in The Dukan Diet which allegedly helped her get in shape. The book (by Dr. Pierre Dukan) advocating the diet has already sold 4 million copies in France, and looks to follow Atkins, South Beach, Sugar Busters! and The Zone as popular high protein, low carb diets in the USA.

In a mainly negative piece on it in the L.A. Times, a Cliff Notes description of the diet follows:

The Dukan diet is divided into four phases — two for weight loss and two for reintegrating foods and maintaining weight loss.

The first and most difficult step is the "Attack Phase." This level lasts from two days to a week, depending on the amount of weight loss sought, and requires dieters to eat only protein — such as lean cuts of beef; fish and shellfish; eggs; and nonfat dairy products — to jump-start weight loss. It allows a minimal amount of oat bran in one small galette, or pancake, each day, and mandates a daily 20-minute walk.

The third, or "Consolidation," phase slowly reintroduces some carbohydrates, fruit and cheese, and allows two "celebration" meals a week that can include a glass of wine. It lasts five days per pound of weight lost.

Last comes "Permanent Stabilization." This phase requires participants to make a lifelong commitment to taking the stairs rather than the elevator, eating three tablespoons of oat bran a day and picking one day per week to eat only proteins in exchange for eating most anything the other days of the week.

The diet may sound similar to the Atkins diet launched in the 1970s, but it relies on low-fat protein and eschews Atkins staples such as bacon and butter.

"For me, fat is enemy No. 2" behind carbohydrates, Dukan said in a phone interview with The Times. Moreover, he said, his diet doesn't require participants to count their carbs and it helps keeps the weight off long-term via the stabilization phase.

"It's very simple and very structured," he said.


As is always the case with high protein diets, Dukan has its critics, but the fact remains it does work for many. And in the end, science is what works...

The Dukan Diet is just another dangerous high-protein fad
Monday, April 25, 2011
Cindy Jones-Shoeman
http://www.naturalnews.com/032168_Dukan_Diet_protein.html
Posted by Robalini at Friday, May 06, 2011

I like the body of the Duchess of Cambridge. It was obvious that she really work with her diet in order to be super sexy during their weddings.

Kate had worked on the diet plan as a preparation for her wedding. All eyes are on her on that they. She must be look alluring in eyes of the public.

Pretty nice post. I just stumbled upon your weblog and wanted to say that I have really enjoyed browsing your blog posts.

In any case I will be subscribing to your feed and I hope you write
again very soon!

Here is my page; i'm having trouble getting pregnant